On Saturday Wallace Girls 1stX1 reached the semi-finals of the Schools Cup by defeating Ballymena Academy 2-1. Wallace for once started very well and scored within the opening five minutes. Left mid Jenny Emerson skilfully beat her player and passed across the face of the goal to Nikki Millar who converted at the right post.

This was the start that Wallace wanted and it gave the team confidence to settle into their usual system of play. The next twenty minutes Wallace dominated with fast flowing hockey. Mid-fielders, Lisa MacDonnell and Jade Neely were passing quickly to the forward line of Laura Murray, Laura Howard and Rachel Morrow who were creating several scoring chances.

Wallace won a series of penalty corners from which Laura Murray hit the post and then the Ballymena keeper pulled off an excellent save from a rebound shot. Towards the end of the first half Ballymena began to apply more pressure. Their forwards were very fast and created a high press which made it difficult for sweeper Tessa Stewart to get the ball out at hit outs. They then equalised just before half time. The ball was played in from the right at a long corner and found the centre forward free at the top of the circle, who scored with a direct shot.

In the second half Wallace again started strongly but Ballymena were always dangerous on the counter- attack. The Wallace defence of Steffi Baron, Tamila Matchett and Jo Leathem all coped very well. Wallace won several more corners but failed to convert. 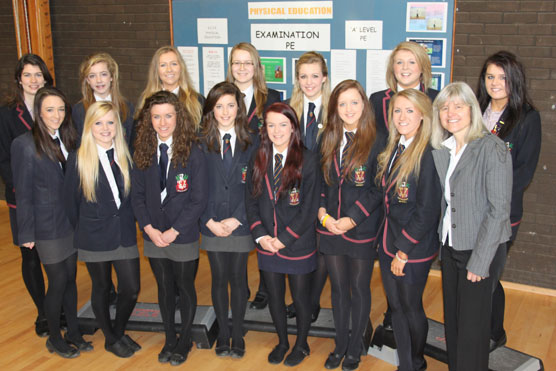 Then with only six minutes remaining, an outstanding piece of combination play from the two cousins on the team resulted in the winning goal. Centre- mid Lisa MacDonnell broke through the centre, passing quickly to Laura at centre forward, who held up the ball and then slipped a pass to Lisa who had switched right. Lisa continued her great run into the circle where she shot low into the right corner giving the keeper no chance.

In the last five minutes of the match Ballymena pushed forward to try and gain the equaliser but the tremendous Wallace defence held firm.

This is a very young Wallace team who have exceeded all expectations and are improving with every game. Their main strength is their sense of team unity. Captain Tessa Stewart and the other three senior players- Jade Neely, Jenny Emerson and Rachel Morrow have led by example.

Coach Maggie Hunter is obviously delighted with their progress and is looking forward to the semi-finals against Victoria College: “I am delighted with our progress this year, particularly as we have a young side. We are all really looking forward to the semi final next Wednesday and hope to create further history by reaching the final for the first time.”