Head of Moving image Arts, David Cleland explained, “This amazing opportunity was made possible by the wonders of Apple’s iChat application. From our classroom in Lisburn we were able to enjoy an interactive workshop with Daniel in North Carolina. The full screen digital link up was the first time we have done something of this magnitude and I’m happy to say it was a great success.” 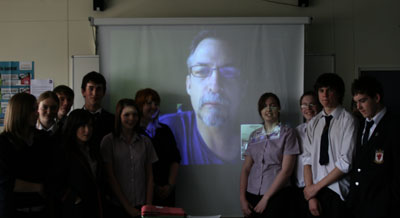 Sixth year Harry Bateman went on,“Daniel also starred in “Big Fish” so he was able to give us lots of information about his experiences on the set of the film as well as the intricacies of writing for film. He was very informal and we had a lot of fun taking part in the video conference.” 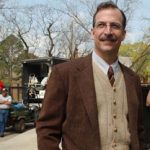 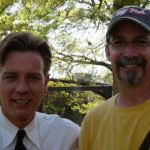 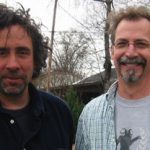 Daniel Wallace commented “I’d just had my first cup of coffee, wandered up to my home office and then I was speaking to and looking at David’s class in Lisburn. So cool. My head’s still spinning over what we were able to do with iChat. ”

The Moving Image Arts A-Level was developed by the British Film Institute and CCEA in collaboration with the Nerve Centre and Northern Ireland Screen. The new qualification is located within the arts curriculum and has a clear focus on the visual arts and its relationship with film. Students have the opportunity to study and create their own films and animations using applications such as iStopmotion and Apple’s Final Cut Express.