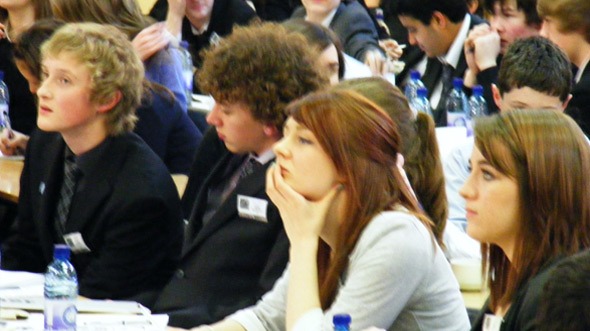 In a new venture for the school during the last year, pupils from The Wallace High School have been participating in Model United Nations Conferences. On the 26th and 27th of February 15 young people and two members of staff, Mrs Karen Ferguson and Mr Michael Lowry, attended a Conference at Wesley College Dublin.

The young people had a wonderful time meeting and debating, socialising and networking and discussing issues of national and international significance with pupils and students from Ireland and further afield.

They took the role of delegations from Syria and Japan at the ‘United Nations’, representing their country’s views on issues as diverse as the Vietnam War, Human Rights, and the land rights of indigenous peoples. Nine Wallace pupils were at MUN for the very first time.

Neil Ross, year 12, won a ‘commended delegate’ certificate. As the Human Rights delegate for Syria he addressed the full General Assembly deftly introducing Darwinism and the need for adaptability into the ‘Democracy’ debate before executing a masterly sidestepping of issues when challenged by a major world power over Syria’s ‘democratic’ record. Rather impressive!

Caroline Smyth and Jonathan Scott, both year 12, made significant contributions to their committees and to the GA, with Jonathan sitting on the Security Council for Japan and taking a major role in the General Assembly debates.

An exciting programme of conferences is being planned for the year ahead involving young people from all year groups in the school.