On Tuesday, the 4th of October Primary 4 visited Castle Ward for Applefest.  Special thanks to Cheryl Stafford who came with us.  I am not going to tell you about our day but instead I will let 2 children from my class do that: 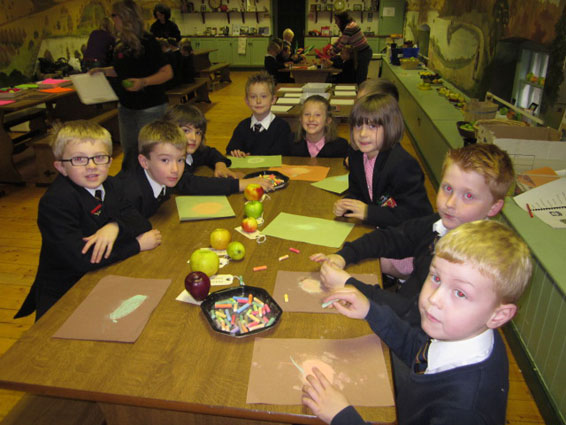 On Tuesday, we went on the bus to Castle Ward.  The bus drive took 50 minutes to get there.  When we got there we had break.  After we had break, we met a girl called Jacinta.  Jacinta took us to the Applefest.  When we got up to the Applefest, we looked at some apples.  The apples were called red delicious, dog snout, winter banana, bramley and big Frank.  After we looked at the apples, we went to plant apple seeds.  Then we made apple bracelets.  We drew apples too.  Jacinta showed us the secret inside an apple.  It is a star.  Then we had our lunch.  After we had our lunch, we played fruit salad with the parachute and then we went to the gift shop.  I bought gold, a lolly, stones and a caterpillar. 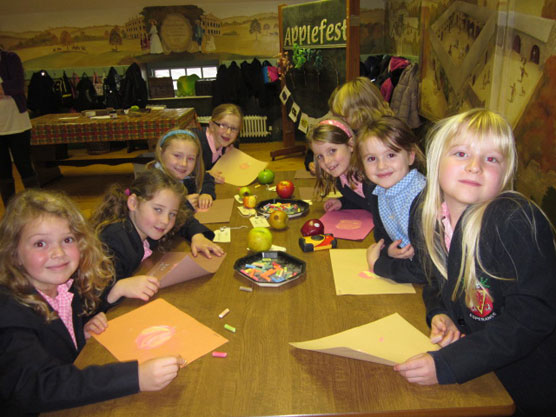 We went to Castle Ward on Tuesday, the 4th of October.  The first thing we did was have our break.  For my break I had breakfast biscuits and juice.  After we had our break we went upstairs.  Our guide was called Jacinta.  The first thing we did with her was planting apple seeds.  After we planted the apple seeds, we made a bracelet.  It was an apple with a leaf and it had a worm through the apple.  Then we did a quiz about apples.  There was a dog’s snout and a winter banana apple.  After we did that, we went to have our lunch.  My favourite bit was going to the gift shop.  I had two pounds to spend and I got a little piggy that I called Nibbles.  It was pink and so cute.  There were so many things in the gift shop like cards, stones, bouncy balls and bird houses.  It was so much fun.  It was probably my favourite school trip ever.