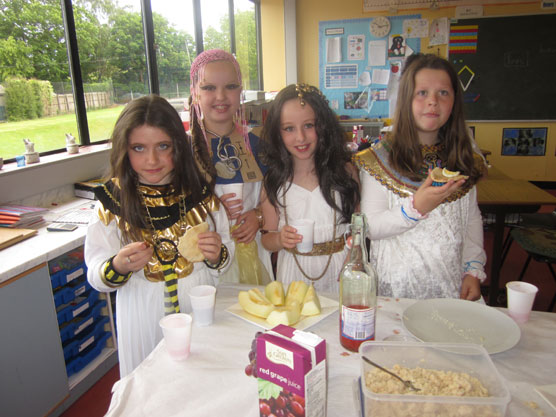 The children in P5 have been studying The Ancient Egyptians as part of their learning in the World around Us.  We researched mummy making, Tutankhamun, pyramids, hieroglyphic writing, food and clothing. On Friday 20th May we had an Egyptian Day.

Most of the children came to school dressed as an Ancient Egyptian.  We had many Egyptian princesses all sporting rich jewellery and lots of kohl around the eyes as well as a young prince and even a mummy!  The morning began with a fashion parade to show the rest of the school the costumes, backing music provided by The Bangles with Walk like an Egyptian.  The children in P5 told everyone about Egyptian clothing and jewellery.

Back in P5 classroom we found out about some of the food eaten by the Egyptians in the period of history we have been studying.  The best part was when we were able to sample some of the food they may have eaten.

The Egyptians ate lots of fruit such as melon, grapes, pomegranate, figs and dates.  They also enjoyed their vegetables and ate onion, garlic, beans, lettuce, leeks, cabbage,lentils and radishes.  They ate a lot of bread, our modern day equivalent being pitta bread.

The Egyptians used honey as a sweetener.  Rich Egyptians would have eaten beef, fish or poultry on a daily basis, poor Egyptians ate meat only on special occasions but ate fish and poultry more often. The Egyptians made wine from grapes and brewed beer from barley, we had red grape juice at our feast!

Our Egyptian Day was good fun and enjoyed by all!