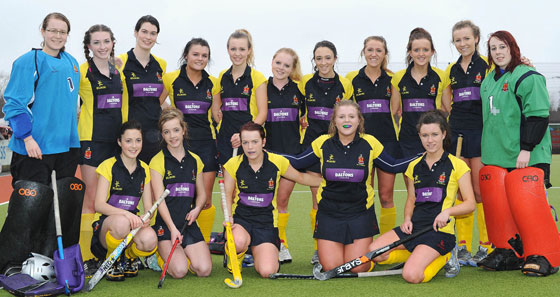 The Wallace High School girls’ hockey 1st X1 will aim to make history next week when they face up to Lurgan College in the final of the Belfast Telegraph Senior Schools’ Cup Final, 2pm start at Lisnagarvey.

Having never previously gone beyond the quarter final stage, the Lisburn girls will aim to defeat their illustrious opponents who have a number of schoolgirl international players in their ranks. They will, however, not be afraid of going into the final as underdogs having disposed of competition favourites Armagh Royal in the 2nd round, winning that game 5 – 4 on penalty strokes after the match finished 1 – 1 (Rachel Morrow on the score sheet).

They also travelled to Larne Grammar for a tricky 3rd round game, again winning on penalty strokes after Morrow had again scored during normal time. This took them into the quarter finals for the second year in a row where they defeated the traditionally strong Ballymena Academy 2 – 1, Nikki Millar and Lisa MacDonnell on target with a superb goal.

With home advantage in the semi final versus Victoria College the girls achieved a 1 – 0 victory which was more comfortable than the score line suggests, captain Tessa Stewart the hero with a well worked penalty corner strike. This win, in front of a noisy four figure crowd, gave the Wallace players valuable experience of playing in a pressure game and should stand them in good stead for what is always the highlight of the year in schoolgirl sport.

Coach Maggie Hunter is pleased with the girls’ progress and would dearly love to bring the cup to Wallace for the first time: “We have a very young squad this year who have really worked hard at their game. They have surpassed our expectations by getting to the final for the first time but I said after the semi final that we would aim to enjoy the moment and then get ready to try and win the final. Preparations have gone well and we have played some top opposition to get us ready for our big day.”

Tessa Stewart, captain and hero of the semi final win is also excited at the prospect of playing in such a big game: “The girls are buzzing at the moment and can’t wait to get onto the field for the final. Whilst we respect Lurgan College and their players, we feel that we are more than capable of putting on a great display and ultimately winning the game. The whole school is firmly behind us and played an important part in our semi final victory against Victoria with their vocal support. I would like to encourage the local community to come out and support us on this massive occasion.”

There is little doubt that this has been very much a squad effort with all players playing a vital role in their progress to the final. The Lisburn side will now try to summon up all their undoubted team spirit and commitment to triumph after a long and exciting road to the final. All at Wallace would like to wish them all the best for the game.

• The Wallace High School have never reached the final of the Schoolgirls’ Cup. Indeed their semi final appearance against Victoria College was their first ever.

• Wallace coach Maggie Hunter is a former Irish international captain. She played in the World Cup in Holland and the European Championships in England, as well as leading Ireland to the Triple Crown. She is also coach of Lisnagarvey Ladies 1st X1.

• The Wallace squad contains cousins from the famous Howard Lisburn hockey family. Lisa MacDonnell and Laura Howard have been key figures in the path to the final, whilst Lisa’ mother Louise is the Wallace manager. They will face up to the three Barr sisters who all play for Lurgan College.

• There is also a family connection between the Wallace Head of Physical Education and the Lurgan College coach. Neil Hinds is on the Wallace side and his wife Julie will be hoping to bring the cup to Lurgan.

• Wallace Principal Deborah O’Hare won a Schoolgirls’ Cup medal with Friends in the 1980s and also played in another final. She is hoping that the girls bring the trophy to Wallace for the first time.