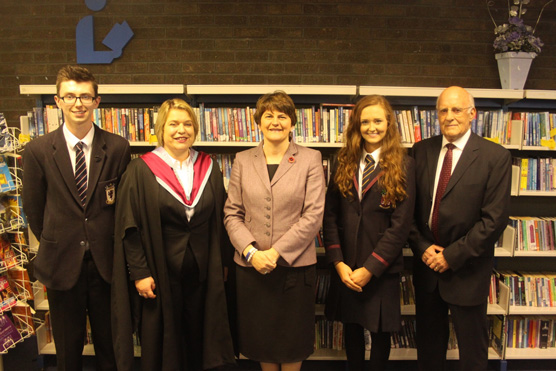 The Wallace High School held their annual Senior Prize Distribution last Friday and were delighted to welcome Mrs Arlene Foster MLA and Minister of Enterprise, Trade and Investment to the school as Guest of Honour.

Principal, Mrs Deborah O’Hare presented her report to the large crowd gathered in the Assembly Hall and used a quotation from Mrs Michelle Obama’s opening speech to the young people gathered at the Waterfront Hall in June (which included eight members of the Wallace School Council) about “young people having the ability to make a mark on this world that will last for generations to come.”

She also reflected on the many academic successes achieved by senior school pupils during the summer examinations, detailing the many individual successes of pupils at both GCSE and A Level, as well as those pupils who were placed in individual subjects in Northern Ireland CEA examinations.

Commenting on the A Level results, Mrs O’Hare stated that: “At A Level the standard in previous years have been above the Northern Ireland Grammar School Average with the grades this year awarded at A,A*, B, C and D the highest on record. Ninety nine percent of  the grades achieved were A* to D with a pleasing 93% of the grades at A* to C.” 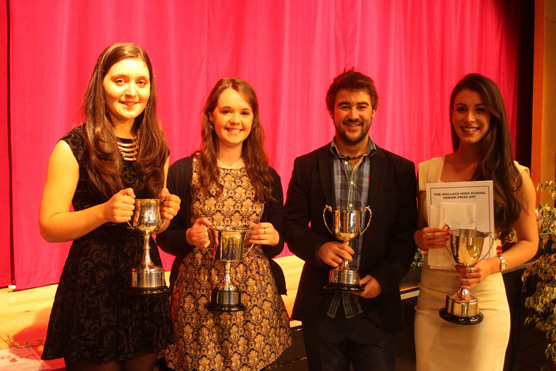 The success of Anna Greenfield (Scholarship to study Law at King’s College, London), Stuart Wilson (studying Modern and Medieval Languages at Queen’s College, Cambridge) and Natasha Gillies (studying Biology at Merton College, Oxford) were noted by the Wallace Principal who also detailed the recent report by Professor Paul Moore (University of Ulster) which complemented the initial roll – out of the one to one iPad devices in the Lisburn school.

Mrs O’Hare concluded her report by looking at the great depth of experiences and activities available to pupils in her school. These included the Habitat for Humanity trip to Malawi during the summer, other charity work (including the male staff taking part in Movember), the traditional Christmas Pie show by Year 14 pupils and the success of Wallace pupils in the Sentinus Young Innovators Competition. Educational visits and sporting trips also took place to Portugal, Germany, the Netherlands, London, New Hampshire USA and Barcelona, whilst the success of the Young Enterprise company “Twist n Spread” was noted as Wallace won Northern Ireland Company of the Year for the third year in a row. 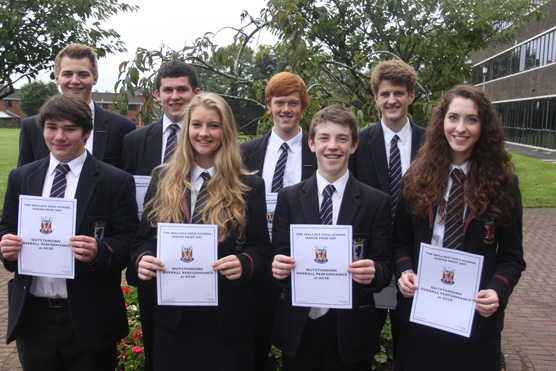 Guest of Honour and Enterprise Minister Arlene Foster spoke to the assembled crowd and told pupils: “Whether it’s successfully growing business or tourism, the common thread that binds it all together is innovative thinking. We need innovative thinkers, people who look to the future, people who find solutions to problems and people who strive to make and create products or services that will appeal to international customers. People like you.

“As you progress through school and beyond, you will discover that life will present considerable challenges – but the flipside of any challenge represents an opportunity. I would encourage you all not to shy away from a challenge, but rather to meet it head on and make the most of every opportunity that comes your way.”

Afterwards, the Minister said: “It was a real pleasure to visit Wallace High and to meet the pupils, who have already achieved so much throughout their time at the school. They should be very proud of their success to date and I wish them all well in their future careers.” 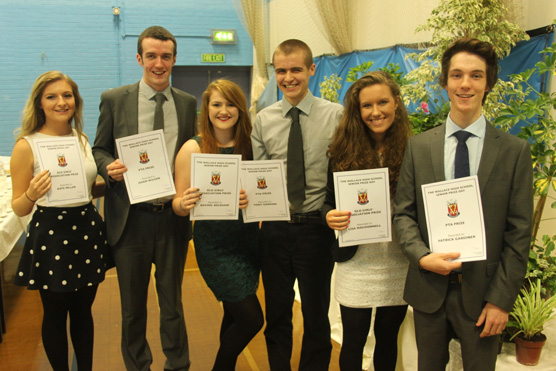 There were several musical interludes during the Prize Distribution Ceremony which concluded, as always, with the presentation of certificates and awards by the Guest of Honour. The Capella Honours sung Eric Whitacre’s “The Seal Lullaby”, whilst there were solos from Adam Murray (“Sunstreams” by Ian Clarke), Zoe Jackson (“If I loved you” by Rodgers and Hammersmith) and Hannah Garrett (“Cunnla”).

After the ceremony, a large crowd of guests, parents, current and past pupils enjoyed afternoon tea and coffee in the Boyd Sports Hall which proved to be an informal end to a great day.