Show me the Honey

Year 9 pupils from Wallace were treated to an extravaganza of honeybee based activities last week. The day involved a large number of curriculum areas, with each lending their own expertise to the pupils as they completed the tasks throughout the day.

The event began with local Beekeeper, Sam Baird, showing the pupils a live honeybee dissection in the assembly hall. Sam also brought a small colony of bees that allowed pupils to see the honeybees at work first hand. There was then an excellent Q & A session in which pupils had the opportunity to quiz Sam on his knowledge of honeybees.

Following the introduction to the day pupils followed a revised timetable and had lessons on honeybee biology as well as completing an “Apprentice” style business task. This task called on the expertise of the art, technology and business studies departments and involved pupils developing a brand identity for a new honey company. 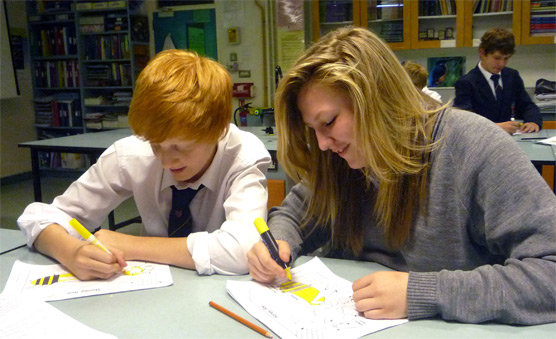 Numerous aspects of product development were involved including designing packaging, creating a brand identity and an advertising campaign. The final aspect of the project was a pitch to the staff involved. This allowed the best teams to be identified.

This project allowed a lot of pupils to show their talents and there are certainly a large number of budding entrepreneurs in year 9. The pupils’ creativity, imagination and problem solving skills were all required as well as the need to plan and collaborate to achieve their goal.

All the pupils involved should be commended for their hard work but special mention should go to the overall winning team of Nathan Todd, James White, Alex Trouton, Luke Thompson and Ryan Wilson.