The Labour MP for Bradford North, Terry Rooney, spent a day in The Wallace High School last week during his fact finding trip to Northern Ireland. Mr Rooney, an MP since 1990, led a series of workshops with Wallace’s Sixth Year Government and Politics students. The event, organised by local councillor Basil McCrea and Wallace teacher Julie Dumigan, proved both beneficial and though-provoking for the Lisburn teenagers.

Julie explained, “Our pupils took part in the excellent political speed dating event organised by Lisburn City Council a few weeks ago and it was there that the possibility of a visit from Mr Rooney was suggested by Basil McCrea.” Lower Sixth students Michael Nicholson and Rachael McCord welcomed Basil, Mr Rooney and Sarah Merrill from Amicus to Wallace. Both students had spent some time researching the MP’s political background and voting record, and took the opportunity to inform the guests of life in Wallace High School. 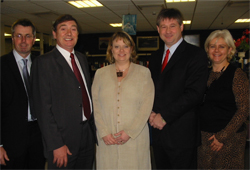 Michael commented, “The wide range of topics covered in our workshops really helped our academic studies come alive. Meeting an MP provided us with a superb “hands on” experience of political life and gave we, the Lower Sixth pupils who are not yet old enough to vote, the chance to ensure our voices were heard about topics such as the education system in Northern Ireland and university top up fees “ topics which have a massive impact on our lives.”

Julie went on, “I was very impressed by the lively debate and the responses given by Mr Rooney, Basil and Ms Merrill, and delighted that our pupils brought up such challenging and diverse issues, from parliamentary accountability to law and order, electoral reform to comparative politics between the UK and the USA.”

Upper Sixth pupil Bob Beck added, “I was on the Lower Sixth trip to Westminster last June and had the opportunity to take part in a similar workshop with a cross party group of MPs. I am delighted to have had the opportunity, following on from Jeffrey Donaldson’s visit last year, to welcome another MP to Wallace and have the opportunity for such an in depth discussion.”

Julie Dumigan concluded, “Plans are already afoot for another Sixth Year trip to Westminster next summer and I am thrilled to say that Sarah Merrill from Amicus has agreed to organise some workshops for us in the House of Commons. We look forward to renewing our acquaintance with both Sarah and Mr Rooney and certainly hope that this is a link which we can develop in the future. I’d like to thank Basil McCrea for his foresight and vision in suggesting such a wonderful opportunity for our pupils.”