Five representatives from The Wallace High School enjoyed the experience of a lifetime recently when they carried the Olympic torch around various towns and cities in Northern Ireland. Below each participant describes how they felt about the experience and what it meant to them personally.

Miss Victoria Walsh, English teacher ran in Bushmills on the Sunday of the Relay:

“Being a torch bearer was an incredible, once in a lifetime experience. It was an honour and a privilege to carry the Olympic flame.”

“Running with the torch was a once in a lifetime experience. I will never forget it.”

“Being a torch bearer was something I never imagined I would get to do. It was an awesome experience.”

“I will always remember carrying the Olympic torch, it was like competing in the Olympic Games for me.”

Evie Dornan, Year 11, ran in Lisburn on Wednesday and presented it to the Mayor:

“To be able to carry the Olympic flame through my home town and present it to the Mayor was an amazing experience I will treasure for the rest of my life.”

All at Wallace wish to congratulate the torch bearers for being selected to carry the torch and thank them for being such great ambassadors for the school. 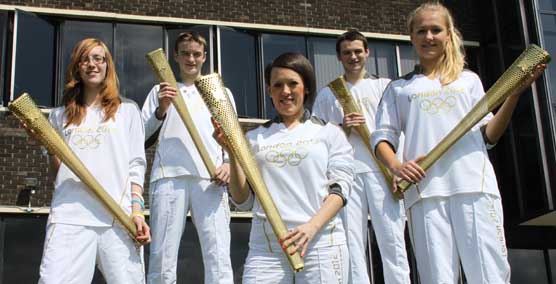