Year 10 Spanish pupils from The Wallace High School have recently embarked upon an exciting Etwinning project with a Spanish secondary school in Malaga.

Etwinning is part of Comenius, the EU programme for schools and the scheme acts as a facilitator to support online-based projects between schools 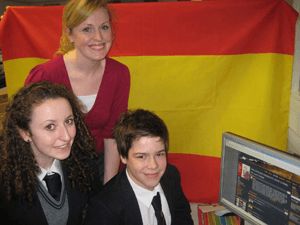 from at least two different European countries. Schools use Information and Communication Technology (ICT) to carry out a joint project.

The Wallace pupils have been communicating with their new Spanish counterparts for over a month through a website set up specifically for the project and the Lisburn teens have found the project to be a great success.

Coordinator Mrs Carolyn Schumann commented, “I had the wonderful opportunity of travelling to Spain recently to work with teachers from our partner school. Not only have our students been improving their Spanish skills but they have also been increasing their ICT skills through the creation of avatars, designing their own web pages as part of the site and using Comic life to create their own computer based comic strips. This project has considerably enhanced our pupils’ learning.”

Head of Modern Languages, Pam Brown concluded, “This project has really engaged the Year 10 pupils in Wallace who are not only improving their ICT skills but are also actively employing their knowledge of Spanish to communicate effectively with their counterparts in our partner school in Spain.

It is proving to be a very successful project and we hope that it is just the start of our link with the Huerta Alta School. Thanks go to Mrs Schumann who is the main teacher/administrator of the Ning website for all her hard work in setting up and managing the project.”