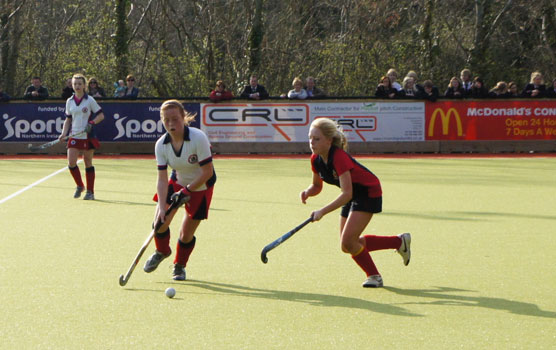 Wallace 2ndX1 made more school history by reaching the final of McDowell Cup. On the way to the final they had excellent victories over Glenola and Sullivan. They then faced Royal School Armagh in the semi-finals. This was always going to a close game but Wallace played a very controlled and quick passing game to win 1-0. Right wing Victoria Kennedy scored the winning goal.

Wallace then faced Ballyclare High in the final. Wallace started well with midfielders Michaela Neill, Olivia Harris and Elizabeth Watt supplying the forward line of Keziah Hood, Sian McBride and Victoria Kennedy with plenty of passes. However Ballyclare were always dangerous on the attack but centre back Julie Whitten and sweeper Joanne Stewart tackled well to break down the attacks and keeper Leah Young was in excellent form. Wallace won several corners but failed to convert them.

The score at half time was 0-0. In the second half Ballyclare began to dominate the Wallace circle but Adele Rodgers and Claire Elliott worked hard to prevent any goal scoring chances.Wallace won more corners but the Ballyclare keeper made a couple of good saves to keep the score level. Then with only thirty seconds to go Ballyclare broke through and scored to secure victory. The final score was 1-0.