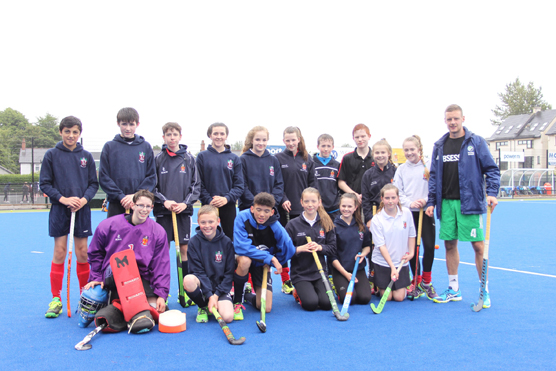 Junior hockey players at The Wallace High School have enjoyed mixing with international hockey players in recent weeks as a series of coaching events and matches have taken place involving their players.

First up, a group of thirty two Year 8 – 10 male and female players travelled to the University of Ulster, Jordanstown, where they firstly watched and were then coached by members of the Canadian mens’ team who are applying the finishing touches to their Rio Olympic preparations on a European tour. Coach Anthony Farry was extremely welcoming to both staff and pupils, allowing the players to get up close to the team practices on the pitch and encouraging them to listen and get involved in aspects of their intense session. All the Canadian players then stayed on to coach our players with a variety of different practices set up, as well as small sided games. Their fun approach to the session helped the Wallace players relax and enjoy the experience, whilst also picking up some useful tips on how to become the best possible hockey player. Autographs, photos and the ubiquitous selfies followed and undoubtedly there will be some Canadian hockey fans cheering on from Lisburn this summer as the team take to the field in Rio. 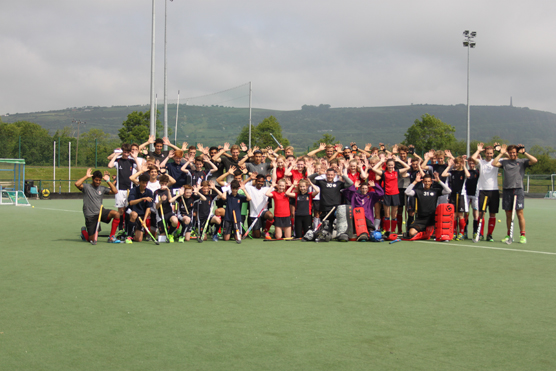 Later that week, forty pupils again made the journey to Jordanstown, this time to watch the Irish ladies team take on Spain who will also be playing in this summers Olympic Games. Many of the pupils present were witnessing their first ever senior international match and were surprised at the speed and skill levels on display, as well as the incredible fitness required to play at that level. Despite taking an early lead, and the support of the Wallace pupils, Spain managed to score twice in the second half to win the game 2 – 1. All at the Lisburn school would also like to congratulate PE teacher, Miss Linda Coughlan, who umpired her third senior international match the day before at the same venue, having earlier in the term umpired at a high level European club competition in France.

Last Thursday saw five current members of the Irish international squad come to Wallace to coach sixty boys and girls as part of their #obsessed fundraising campaign for the Rio Olympics. Lisnagarvey captain and eighty five capped current Irish player Jonny Bell was instrumental in setting up the session and organising the other coaches and deserves great credit for this. Also present were Eugene Magee who has amassed over two hundred caps, centurion Chris Cargo, Matthew Bell and Neal Glassey. The background to this session was not only to raise some money for the teams preparation for Rio, but also to create opportunities for our younger players to be coached by some of the top players from within our own country.

This session took the form of four different skills stations, each focussing on a particular area, whilst there was plenty of time for fun matches at the end with the Irish players happy to join in. Again, photos, selfies and autographs were the order of the day and all the players were happy to stay beyond the allotted time so that none of the pupils present were disappointed.

Year 8 pupil Alfie Shanks attended all three events and enjoyed the experiences immensely: “It was really brilliant to get the opportunity to be coached by players who will be on TV this summer at the Olympic Games. I definitely learnt a lot from both coaching sessions and also by watching the game between Ireland and Spain.” 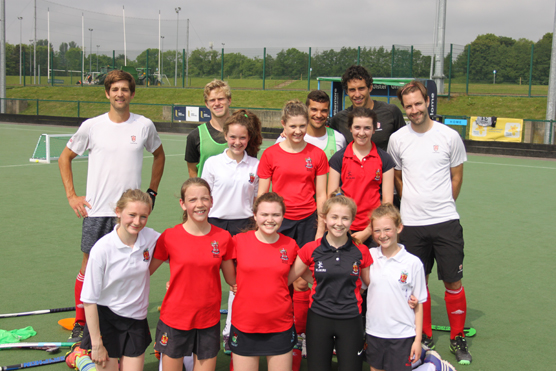 In other hockey news several of our pupils have been playing or training with representative teams over the past few weeks. Matthew Nelson, Scott McCabe and Andrew O’Hare have been selected for the Irish under 18 squad who will play in the Eurohockey A Divison in Cork in July, the second year in a row that Wallace have the highest representation on the under 18 panel. Year 11 pupil Rachel Houston has been picked for the Irish under 16 squad and will travel to a six nations tournament in Belgium where she will play against some of the top hockey nations from Europe. In May, Jacob Hermon, Ben Nelson, Alyssa Jebb and Anouk Morwood played for the Ulster under 17s against their Scottish and English counterparts, whilst at the weekend Jonny Lynch and Max Taylor represented an Ulster under 15 side against Scotland at University of Ulster, Jordanstown.