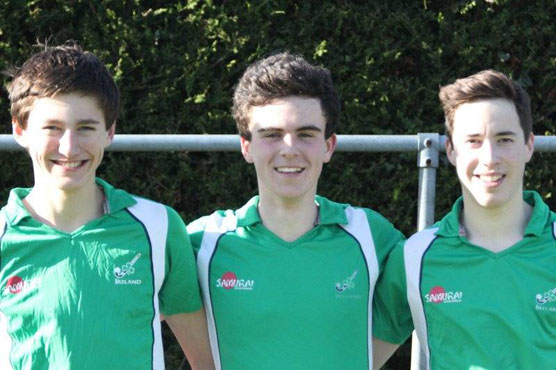 The Wallace High School 1st XI boys’ hockey team have progressed to the semi final stage of the Burney Cup on the back of two excellent results against RBAI and Campbell College.

In early February, RBAI were the visitors to Lisnagarvey HC in what was viewed by many as the tie of the round between two teams who had played each other in the semi final of the pre Christmas McCullough Cup.

Into the second half and the game was killed off as a contest when Andrew O’Hare scored a goal in the first minute of the half. Again, Murray was the provider with a slide rule pass which O’Hare took around the keeper and hammered into the net on the reverse side.

At this stage RBAI created some chances, senior irish international James Lorimer flicking a penalty corner just wide. At the other end, Wallace scored a well worked penalty corner of their own with Jack Wilson applying the finishing touch. RBAI scored a consolation goal with fifteen minutes to go before another sweeping move between William Carey and O’Hare set up Wilson for his second and Wallace’s fifth.

The final score was Wallace 5 RBAI 1.

Last Saturday, the Lisburn school travelled to Belfast to face Campbell College in the quarter finals knowing that a difficult game lay ahead against opponents who have produced several outstanding results throughout the season. Despite a cold and slightly delayed start a large crowd gathered to witness what turned out to be a very entertaining game.

Wallace had an opportunity to open the scoring from the hit off but Andrew O’Hare’s effort was well dealt with by the Campbell goalkeeper. This seemed to spring the Belfast side into life as shortly afterwards they opened the scoring, a Chris Morrow ball into the circle being expertly turned in by one of their forwards. Their lead was dramatically increased soon afterwards when Irish under 18 star Chris Heath dispossessed a Wallace defender before calmly rounding and slotting the ball past goalkeeper Fraser Rodgers. 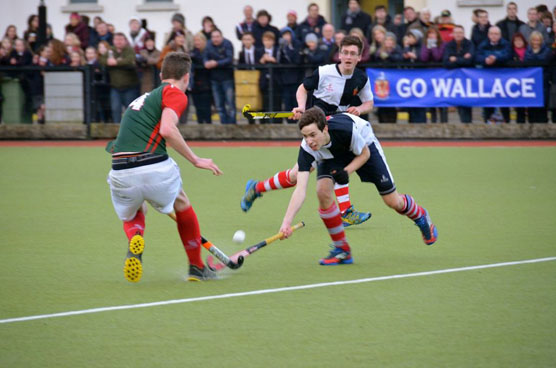 At this stage it appeared that a shock was on the cards but the Wallace players remained calm and got a foothold back in the game just before half time when captain Ross Kelly scored a low drag flick from a penalty corner.

Both sides knew at half time that whoever scored next would be in a strong position and it was Wallace who obliged with a neat first time deflection from Andrew O’Hare at the back post. This was quickly followed by a tap in from Daniel Nelson for the Lisburn school. The game had changed dramatically in Wallace’s favour and when O’Hare scored again they had scored four goals in the space of ten minutes meaning that Campbell really had to chase the game.

As they chased, gaps started to appear at the back and a slick passing move saw Jack Wilson score the goal of the game with an unbelievable diving finish from an O’Hare pass. When Kelly scored his second from the penalty spot a great comeback was complete and it was to Campbell’s credit that they rallied to force a number of penalty corners and score a consolation third.

The final result was Campbell College 3 Wallace High School 6 in a superb advertisement for schoolboy hockey in Ulster.

Wallace will now face either local rivals Friends or Cookstown a High a School in the semi final in what is sure to be a demanding task for the current McCullough Cup holders. Information on the date, time and venue of this game will be available on the school sport twitter account @wallacesport when known.

Three members of the 1st XI have also been busy with representative hockey recently with Daniel Nelson, Sean Murray and Mark McNellis representing the Irish under 18 team in the under 21 interpro tournament in Dublin. All three players performed superbly and sixteen year old Sean was rewarded for his performances with selection for the Irish under 21 squad who competed in a four nation under 21 tournament held at Mossley HC before half term. This involved playing against England, Scotland and world champions Germany and all involved in hockey at the Lisburn school wish to congratulate Sean on this fine achievement.