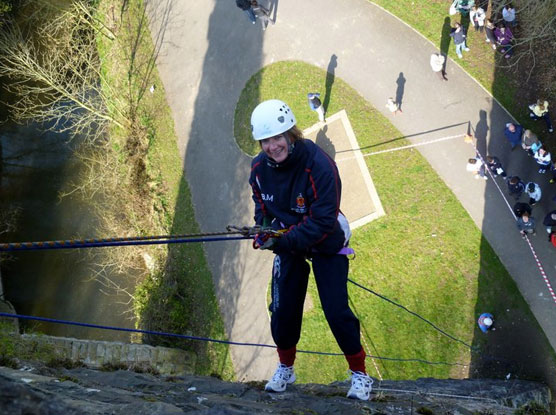 The Wallace High School is taking part in its first World Challenge Expedition in July 2011. The destination is Ecuador in South America. There are 12 students and two members of staff who will be accompanied by the World Challenge Leader to Ecuador leaving the UK on the 3rd July 2011 and returning on 27th July 2011.

The challenge for the pupils is to raise £3,500 in order to participate in the expedition. Normally there is a two year build up to the expedition; however the WHS pupils have only had 14 months. The pupils have been organising individual events to raise the finances as well as some group activities such as a junior disco, a bun sale and recently an abseil down Dromore Viaduct. Fundraising is seen as a major aspect of the World Challenge Experience with the expedition being the finale.

The challengers have attended regular meetings and participated in a training expedition which focused on camp craft skills, first aid as well as team work and fitness levels.

The expedition will begin with an orientation day in the capital Quito. The old colonial town is an UNESCO heritage site. This day will enable the challengers to take part in several tasks which must be completed before the next stages.

The Acclimatisation Phase will give the team the opportunity to trek at high altitude by summiting Ilalo peak (3,200m) which is an inactive volcano. This will prepare the team for a higher trek to 3,700m in the Andean Mountains. The main trek is a four-day exploration of the beautiful central highlands around Quilitoa, the crater lake, at 3,900m. There will be the opportunity to explore a cloud forest, trek through open farmland and pastures, pine forests and pass through indigenous villages.

There will be a couple of days for R&R before the Rainforest Phase commences. The Amazon or ‘Oriente’ region, located to the east of the Andes, is one of the world’s most biologically rich areas. The team will explore the jungle by foot and by river. They will be accompanied by local guides who will pass on their expert knowledge about the way of life in the rainforest and meet local people. This will be followed by another day of R&R.

The Community Project Phase will give the team the opportunity to learn about the environmental, social and economic challenges facing a small village and make a contribution to their needs. During the six days the team will be working alongside an Ecuadorian community.

The expedition finishes with a shopping day in Quito for souvenirs before the long journey back to the UK commences.

Thank you to everybody who has supported the World Challenge Team in preparation for the biggest experience of their lives so far!