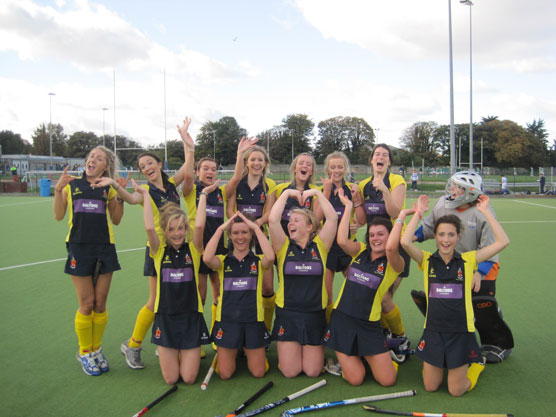 Wallace 1stX1 secured a place in the quarter finals of the Schools Cup by defeating Larne Grammar last Saturday.
Larne started very well and dominated the first ten minutes as Wallace appeared nervous and behind the pace of the game. Larne took a well deserved lead from a quick passing forward move which split the Wallace defence.

Once the goal was conceded, Wallace settled and the midfield of Jade Neely, Lisa MacDonnell and Jenny Emerson began to create chances for the forward line. Laura Murray and Laura Howard, led from the front and their strong running created problems for the Larne defence. However the Larne keeper was in excellent form and Wallace could not convert their chances.

In the second half Wallace applied more pressure. Steffi Baron and Jenny Emerson combined well on the left to allow Rachel Morrow to penetrate the defence but Wallace failed to equalise. Larne were dangerous on the counter-attack and captain Tessa Stewart along with Tamila Matchett and Jo Leathem did well to break down attacks.

Time was running out and although Wallace had won eight penalty corners they still could not equalise. With thirty seconds on the clock another penalty corner was won which Rachel Morrow converted, to the relief of all her team and the Wallace coaching staff.

Twenty minutes of extra time followed but still the score remained 1-1. The match was decided on strokes as in the previous cup match. Lisa MacDonnell, Rachel Morrow, Laura Murray and Tessa Stewart all converted whilst keeper Anna Jones made an excellent save to secure victory.

Wallace reached the quarter- finals last season in this competition so the objective is to progress one stage further this year- hopefully without the drama of strokes!

The Quarter final will take place on Saturday 29th January at Lisnagarvey Hockey Club. 11.15am Pass Back.