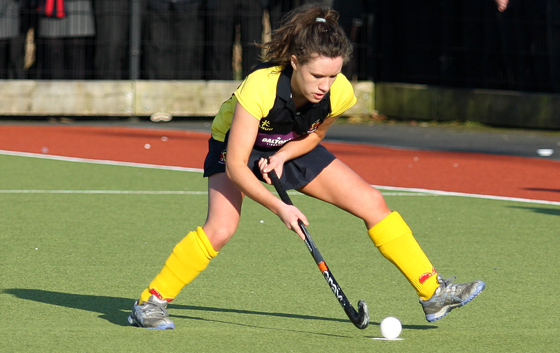 A crowd of over 2000 people turned out to watch the pinnacle of schoolgirls’ sport and enjoyed a high standard and competitive game on a sun – splashed day in Hillsborough. Although Lurgan went into the game as slight favourites, there was a quiet determination within the Wallace squad that they could win the game and as it turned out they were not too far wrong. 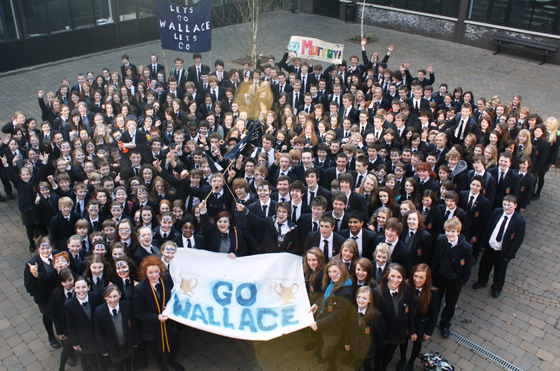 Wallace conceded two early penalty corners in the first half, but brave defending and goalkeeping from the excellent Anna Jones meant that they got over their cup final nerves and worked their way into the game culminating in the Lisburn girls winning their own first penalty corner after 10 minutes. Unfortunately the corner broke down and a vital chance was gone. 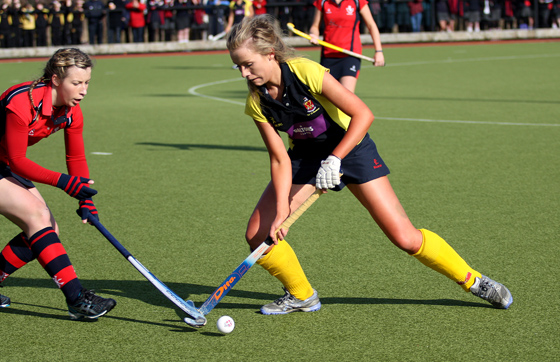 The remainder of the half was dominated by Lurgan College who forced a further three penalty corners. However, Jones again stood firm, ably assisted by her captain Tessa Stewart and the excellent Jo Leathem. 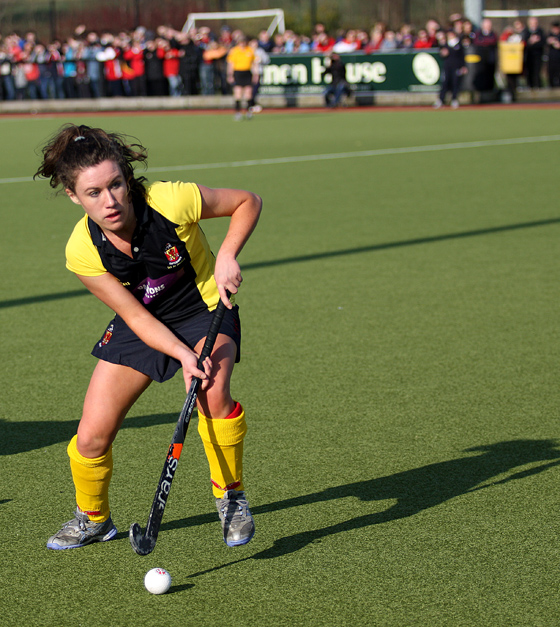 The second half begun with Lurgan pressing hard for goals but again Jones, Stewart, Leathem and their defensive colleagues Tamilla Matchett and Steffi Baron resisted everything that Lurgan could throw at them from both open play and set pieces. After 23 minutes of the half, the hard working Lisa MacDonnell worked her way down the right hand side and skillfully won her team a penalty corner and a chance to snatch the lead with only seven minutes remaining. 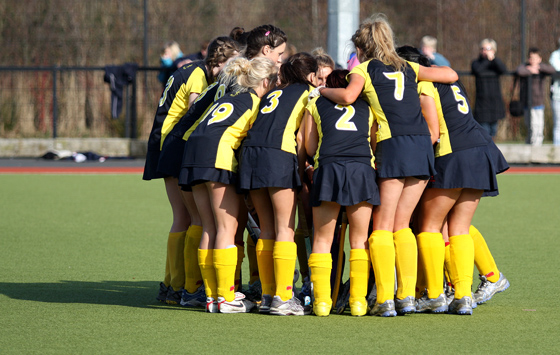 Laura Murray managed to get a shot in and the rebound fell to Jade Neely who just failed to put the ball into the net. With only one minute left Lurgan missed their own chance for glory when resolute and last ditch defending denied them the late equaliser they so craved. 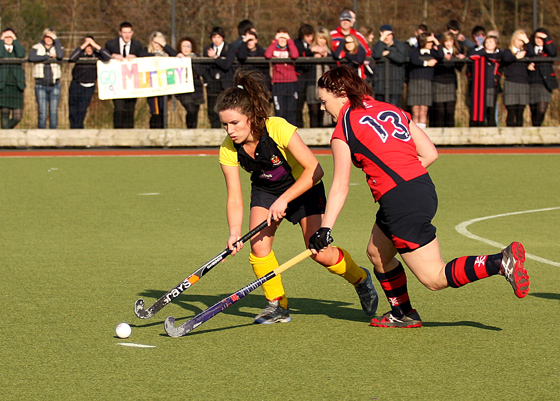 This took the game into extra time (10 minutes each way) and again Wallace were on the back foot, conceding a further 4 penalty corners which were all superbly defended. Rachel Morrow and the hard working Jade Neely were still asking questions of the Lurgan defence when given the opportunity, but Wallace were again indebted to skipper Stewart who brilliantly took a penalty corner off the line with only two minutes left, whilst the defensive routine again defended brilliantly to prevent their opponents scoring with the last hit of extra time. 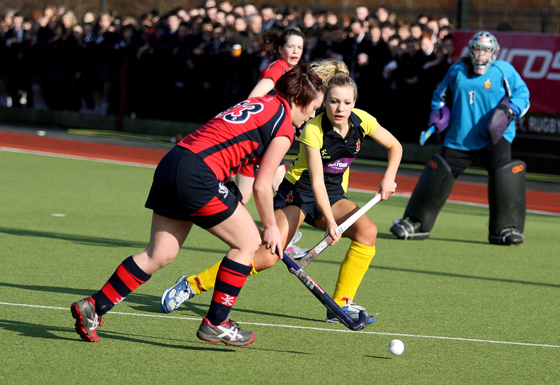 Penalty strokes are never a nice way to lose a final although both teams had won in previous rounds on strokes, Wallace defeating Armagh Royal and Larne Grammar, whilst Lurgan defeated Banbridge Academy in the semi finals in the same way. 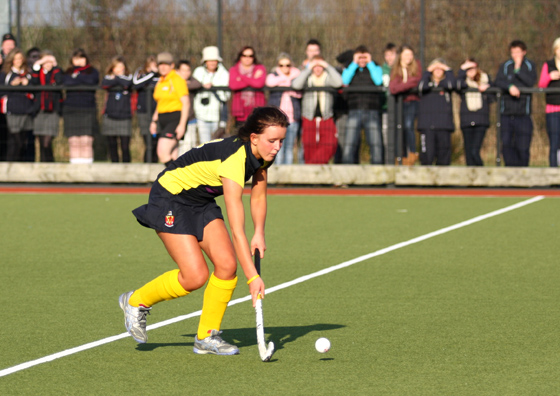 Lurgan scored their first through the inspirational Natalie Barr, whilst Lisa MacDonnell equalised for the Lisburn school. Anna Jones continued where she had left off in normal time by saving the next two, whilst Rachel Morrow and young Laura Murray both scored for Wallace. 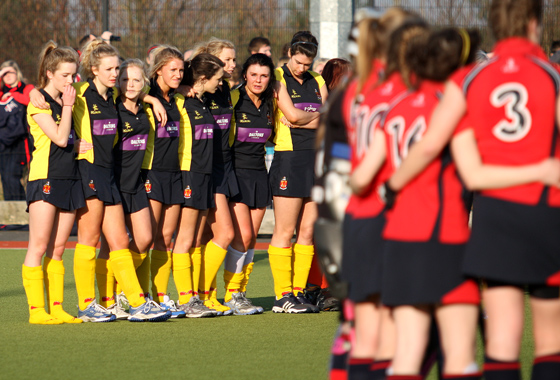 This left Wallace with a great chance to win the cup, knowing that if Lurgan missed either of their last two and they scored one of theirs then the cup would be going to Wallace for the first time. The Lurgan penalty takers showed great courage to score their strokes, whilst Jo Leathem hit the post and Tessa Stewart missed for Wallace. The tension was now unbearable for both teams and the large group of supporters who had assembled from both schools.

Wallace missed their first sudden death stroke, but Jones again came to the rescue with a superb save to deny Irish under 18 international Barr. Another Wallace miss meant that the destiny of the cup was in Lurgan’s hands for the first time in the stroke competition and this time they made no mistake.

Wallace coach Maggie Hunter was understandably gutted after the game and paid credit to both teams: “It’s never nice to lose a game on strokes, especially one as important as this. I would like to congratulate Lurgan College on their victory but also to praise our girls for their performance throughout the brilliant cup run and particularly in this high pressure game today. I am so proud of what this young team has achieved and hope that it has given them the taste of playing in big games. I also want to thank my manager Louise MacDonnell who organises the fixtures for all teams in the school and who has really revelled in this cup run. Roll on next year.”

Captain Tessa Stewart was also disappointed but again proud of what her players have achieved: “To play in the final was a real dream come true for all of us and although we’re devastated at the loss we’re really proud of getting to the final. There were a few nerves flying about in the build up to the game but the girls handled the pressure brilliantly and gave a superb account of themselves.”

As a Year 14 pupil Tessa and several of her team mates also headed to the school formal after, something she was also looking forward to. “Two of the things that I have always wanted to do at school are to go to the formal and play in the Schoolgirls’ Cup final. To get both on the same day is something else and I suppose helps us deal with the disappointment of not making school history. We’ll enjoy the night and reflect on the road to the final tomorrow and of what we have all achieved as a squad.”

Wallace Principal Deborah O’Hare, herself a former winner of the cup congratulated both schools: “I should like to pass on my congratulations to Lurgan College on winning the Schoolgirls’ Cup. I thought that both teams played superbly whilst the supporters from both schools created a superb atmosphere. From a Wallace point of view I am obviously disappointed for the team, but wish to congratulate them on their fine achievement in getting to the final, I am very proud of them all. I should also like to thank both Maggie Hunter and Louise MacDonnell and all the other hockey coaches in the school who have helped the players reach their full potential.”