Wallace is well known in Northern Ireland for its pupils’ passion for charity but its success in raising funds for Pancreatic Cancer has exceeded all expectations. The tragic catalyst to the £13,550 donation made by Wallace to the fund was the illness and death of Mr Bill Wilson, the school’s Head of Mathematics and a Senior Teacher. Bill was also renowned in Northern Ireland for his service to the Duke of Edinburgh’s Award Scheme; he had been closely associated with the Wallace unit for his entire career of 39 years, leading it with distinction for many of those years. 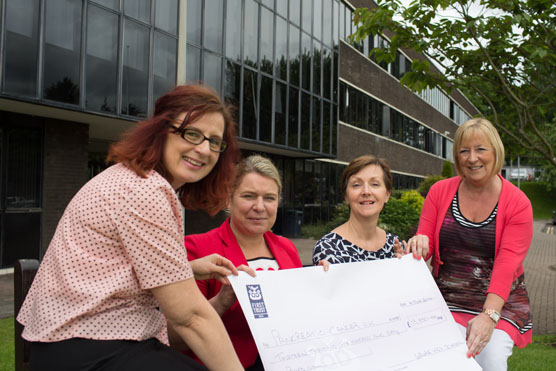 Bill died on November 19th 2013. During the six week period concluding on New Year’s Eve pupils, former pupils, family and friends donated to the school’s online donation page raising a phenomenal sum. The school’s Facebook page had tens of thousands of hits in the immediate aftermath of his death whilst hundreds attended his funeral and the subsequent celebration of his life in Wallace.

At both events attendees wore purple ribbons and bright colours in grateful remembrance of Bill. June Wilson met Jeni and Dianne at Wallace on Wednesday 5th of June and paid tribute to both the work of the charity and all those who have ensured Bill is remembered. She noted “Bill was a great believer in organ donation carrying a donor card all his adult life, but sadly, due to the ravages of his cancer donation was not a possibility. I know he would be both delighted and astonished by the generosity of the people from this community who have donated such a large amount in his memory. Through these donations, many more people will benefit than Bill could ever have imagined. I would also like to thank the charity which I found on line immediately after Bill’s diagnosis. It was exactly what I was looking for-a very informative, supportive online forum, available to both patients and carers. I found this service invaluable through the darkest of times.” 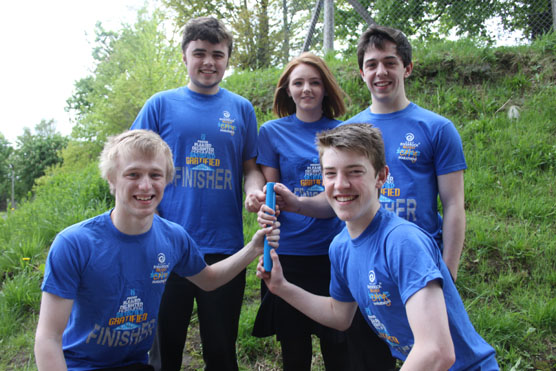 Bill was held in the very highest regard by staff and pupils alike. On the May Day holiday the Bill Wilson Memorial Walk took place in the Mourne Mountains. Masterminded by Wallace Vice Principal David Cleland the event was a great success with over £3,000 being raised. On the same date a team of Year 13 students (Neil Kilpatrick, Andrew Irvine, Lewis Kirk, Luke Thompson and Rachel McMurray) ran the Belfast Marathon in Bill’s memory raising over £1,000. Later this year Bill’s close friend Colin Henderson will complete the Mourne Wall walk also in Bill’s memory. Commenting upon these and other ventures June said “On Bill’s behalf I would like to thank everyone who donated online, bought purple ribbons or undertook personal challenges in order to fundraise. Pancreaticcancer.co.uk is a charity which is supported solely by donations. Please continue to help fight against this cruel disease.”

Principal Deborah O’Hare said “Our school motto of Esperance, which means hope, is a living ideal in Wallace. We both hope and believe that great good can come from this practical outpouring of affection for a colleague who was much loved.”