A “royal” visit for Claire

It’s not every day you get an invitation from Earl Spencer but that is exactly what arrived in the Wallace post accompanied by a letter stating that Deputy Head Girl Claire Hanna was a Diana Award winner. The Diana Award is “awarded to courageous, caring, compassionate young people, transforming the lives of others in the name of Diana, Princess of Wales.” Claire was nominated by the school for the Champion Fundraiser category and a supporting reference was provided by Rebecca Oates of local charity Cancer Fund for Children. Wallace has an almost thirty year association with this charity and has raised almost £12,000 this year for its work.

Since the death of a close friend and classmate in 2011 Claire has been passionately promoting the work of the charity both inside and outside of Wallace. Aside from organising several “socials” (think barn dancing and party games!), coffee mornings, bun sales and jewellery making Claire also literally took to the sky when she completed a sky dive for her 16th birthday in aid of the fund. Having fuelled her passion for excitement Claire joined fellow sixth form members of the school’s Charity Committee and abseiled down Belfast’s iconic Europa hotel “a highlight of my brilliant time at Wallace.” 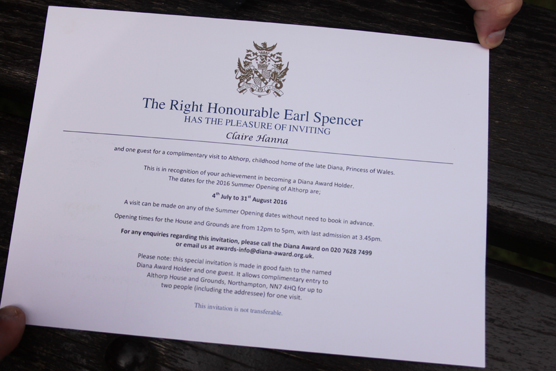 Claire will attend an award ceremony in Belfast but she has received an invitation from Earl Spencer, brother of Diana Princess of Wales to visit Althorp House, the childhood home of Diana. During this school year the Charity Committee organised a “social” for Year 8 whilst Year 14 donated half of the proceeds from the school’s legendary Year 14 show (Christmas Pie) and held a coffee morning for staff in their final days at Wallace. All of these events were in aid of the Cancer Fund for Children. 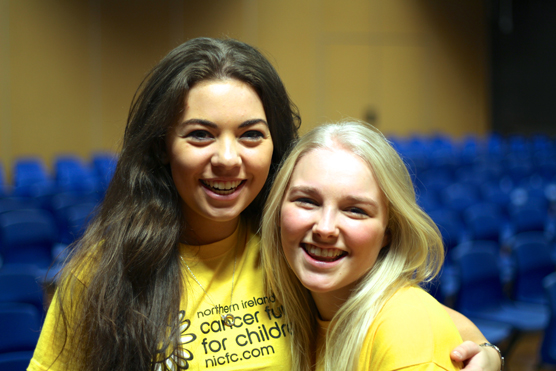 The “spirit of generosity” ascribed to the school’s founder continues to find powerful expression in the generosity of its pupils today. Principal Mrs Deborah O’Hare said “Our school family is delighted by this award to Claire who has been a marvellous ambassador not only for the Cancer Fund for Children but for the joy which can be found in volunteering. As part of our Senior Prefect team she was a role model for others and we hope that we will have further recipients of the award in years to come.”