Charity and compassion…..not just for Christmas

As the end of term approaches Wallace pupils and staff can review with pleasure how the school has lived up to its founder’s legendary spirit of generosity. Central to the school’s charitable work is its longstanding association with the Cancer Fund for Children. Prior to half term the GCSE Journalism class visited the fund’s flagship centre Daisy Lodge in Newcastle where they were according to one pupil ” literally stunned ” by the 5 star splendour of the therapeutic respite centre. Their visit provided the source material for their regional piece of Controlled Assessment and Year 11 pupil Sarah Scott subsequently participated in a series of assemblies introducing the work of the Cancer Fund for Children to Years 8 and 9.

The school participates in ReadOn, the charity’s sponsored reading event, in alternate years. A week of class time in the junior school is devoted to reading and pupils are issued with a sponsor form. This year for the first time House points will be awarded to top fundraisers in each class set and the charity has also commissioned a trophy which will be awarded to the top fundraising school in Northern Ireland. Year 8 pupils gave excellent support to a social evening by Eternity Socials in aid of the fund and had lively fun into the bargain! 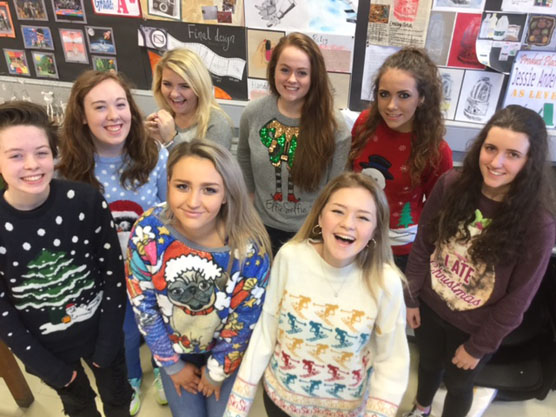 The fashion show by the Girls’ Hockey Club provided a stylish night out for all who attended and netted an impressive £1400. The girls were primarily fundraising for their hockey tour next year but have also given a significant donation to The Mary Peters Trust. The celebrated Olympian visited Wallace in person to accept the cheque and to give a brief and inspiring address to her audience of sixth formers.

Christmas jumper day is a highlight in the school’s calendar and this year was no exception. The proceeds were earmarked for Asha as we have a team heading to New Delhi in October 2016 and a new innovation this year was the photo booth. Equipped with a splendid selection of props and the all important large photo frame the Charity Committee and the Asha team snapped large numbers of friendship groups providing a happy memory of a great day. At the close of the day £1080.15 had been raised ; jumper envy had also been aroused!

The RE Department has been organising its annual creation of hampers for Women’s Aid. Sixth formers assist class tutors in the collection of foodstuffs and other Christmas themed items and the hampers are collected for distribution in the final days of term. Wallace’s teachers also contribute to the creation of ” pamper hampers” for women currently resident in the women’s refuge; this collection is co-ordinated in Wallace by the Principal’s PA Mrs Colleen McDowell and organised via a local church. 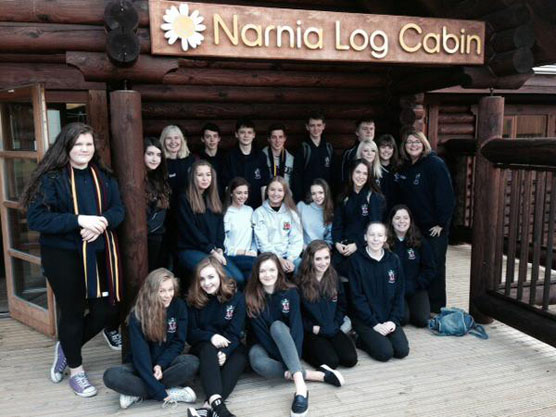 Wallace has the largest Rotary Interact group in Northern Ireland. The group chooses two charities per year, one national , one international, in addition to performing acts of community service. Their face painting skills are finely tuned as they create Wallace’s blue and white army on a regular basis. They have developed a charming Christmas tradition selling candy canes, providing a singing delivery service of the same and even fostering a few Wallace romances!

The final week of term sees Wallace’s legendary Christmas Pie, one of the school’s longest and most popular traditions. Each December the Year 14 pupils, under the supervision of a team of staff, write and perform a show. The proceeds of the event are given to charity and this year the chosen causes are the Cancer Fund for Children and Pancreatic Cancer UK in affectionate memory of Briagh Hull and Bill Wilson. Pupils are also eagerly awaiting the launch of the film # WHSkindness which celebrates the many acts of kindness performed by pupils on a day to day basis. 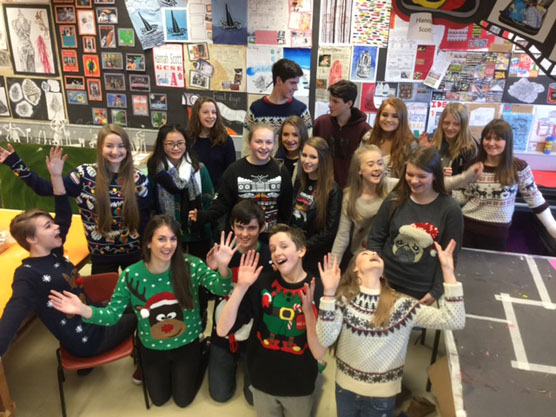 Commenting upon the term’s events Principal Mrs Deborah O’Hare said ” Christmas is a very special time of year but also one of hardship for many families. I am very proud of the commitment and energy displayed by staff and pupils and am delighted to think that our school family is helping other families at this sacred time of year. I would also like to thank MIA teachers Mrs K Gregg and Mr S Calvert for all their work in creating our film #WHS Kindness, an affectionate celebration of day to day kindness.”