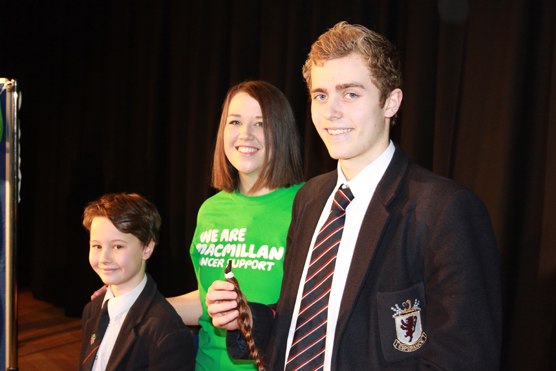 The Wallace Assembly Hall was packed to see the hotly awaited charity event of the half term. Mr Calvert’s magic touch with sound and lighting had generated a lively atmosphere as Mrs Elliott prepared to ascend the stairs to the stage. The charity committee had excelled themselves with ticket sales and the stage was decorated with notice boards celebrating the total raised and highlighting the charities to benefit from the event. Macmillan Cancer Support will be the beneficiary of the funds raised and The Little Princess Trust now has Mrs Elliott’s lengthy locks.

Supported by Dr Terris, Mrs Elliott managed to keep smiling cheerfully as MC Mr Alexander did his best to whip the crowd up into a frenzy of anticipation by practising Mexican waves! Drum rolls from Ryan Garnham added to the excitement as the first winner’s ticket emerged from the depths of the tombola. Year 8 pupil Archie O’Neill was visibly delighted to get the chance to wield the scissors whilst Mrs Elliott, cheered on by her mum, husband and a visiting Mrs Cousins, bravely did not flinch. Seconds later she had a rather eccentric and imbalanced hair style! To her rescue came another of her own mathematicians, Year 13 student Alex Haskins. Alex approached the task with every appearance of seriousness and seconds later the second plait was gone! Amazingly, the new look hairstyle was remarkably neat but lurking in the wings was Helen Reddick from Mega Hair Studio who had kindly offered to restyle Mrs Elliott’s shorn locks. 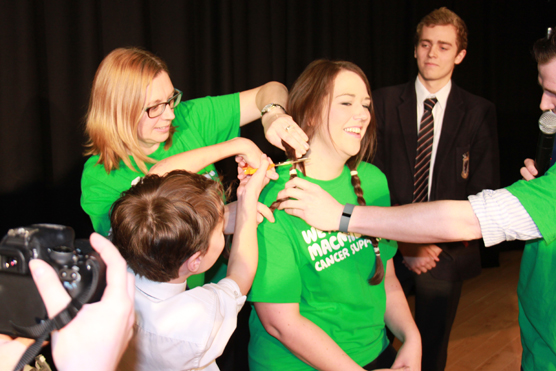 The event was in support of two of Mrs Elliott’s friends, Wallace Biology teacher Mrs Jill Lockhart and Mrs Lynsey Trimble, as both are currently battling the disease. The fundraising total to date is a staggering £3,340 totally smashing the initial £1,000 target.

Speaking after the event Mrs Elliott said “I would like to thank everyone for their outstanding support. There were moments when my nerves began to set in but now I am beyond thrilled at what we have raised.” 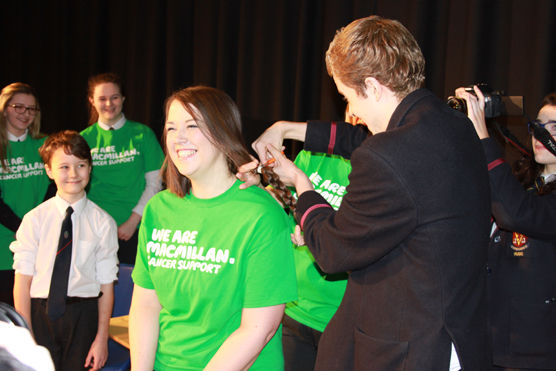 Senior Teacher Heather Gracey said “Events like this don’t just happen. They need a lot of planning so a big thank you to the Charity Committee, to Mr Alexander and Mr Calvert and to the maintenance staff and the bursar’s staff who handled all the practicalities so well. The biggest thank you of all is to Mrs Elliott who shared this very special day with us in school. For the Year 8 pupils this was a little glance into the fun which often accompanies our charitable giving.”

Finally, just like the closing credits of a reality TV show. Mrs Elliott is currently living happily with her new hairstyle, her children and her husband. Her 3 year old daughter loves the fact that she and mum have matching hairstyles!