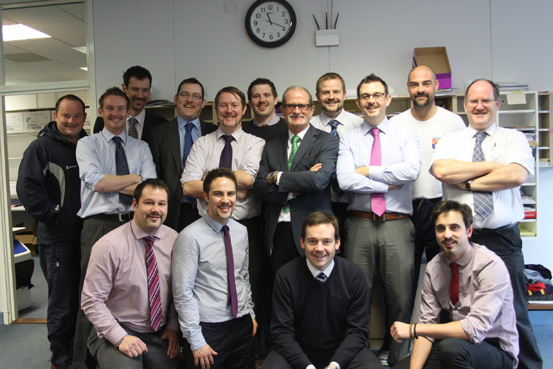 The Wallace High School raised a magnificent £600 for Children in Need last week as staff took part in a highly competitive and entertaining “Space Hopper” race in the school Assembly Hall.

Heats took place throughout the week with the budding staff “space hoppers” being whittled down to Biology teacher Matthew Glenn, Geography teacher Laura Topley and English teacher Nick Maltman who contested the final. It was Mr Maltman who emerged victorious in front of a large crowd of pupils who certainly got into the spirit of the event. Fifteen male members of staff have given their top lips to Movember, a charity which aims to raise vital funds and awareness for men’s health, specifically prostate cancer and testicular cancer in the United Kingdom. The response to this campaign within the school has been amazing so far although the final total will not be known until the beginning of December.

As ever, the Charity Committee under the stewardship of Mrs Elizabeth McClenaghan and Miss Laura Topley has been extremely busy with their weekly collections. Thousands of pounds have been raised already for a variety of good causes including the Oscar Knox Appeal, The Gary Wilson and William Porterfield Charity Cycle around Ireland for Cancer Research, ABF The Soldiers’ Charity and the Children’s Heartbeat Trust.

Dr Liam Halferty followed in the footsteps of other staff members Bill Wilson, Jonny Reid, Ian Latham and Neil Armstrong by completing his first ever marathon in Dublin in October. He has already collected hundreds of pounds for “Warchild”, a charity which helps children whose lives have been affected in some of the world’s most dangerous countries.

Speaking on behalf of the Charity Committee, Elizabeth McClenaghan said: “It never ceases to amaze us how generous the Wallace school community is. From our weekly collections to the bigger events like Children in Need we are continually delighted with the response from everyone. I would like to thank publicly all the teachers who took part in the Children in Need event last week and also the pupils who generated such a fantastic atmosphere in the Assembly Hall.”