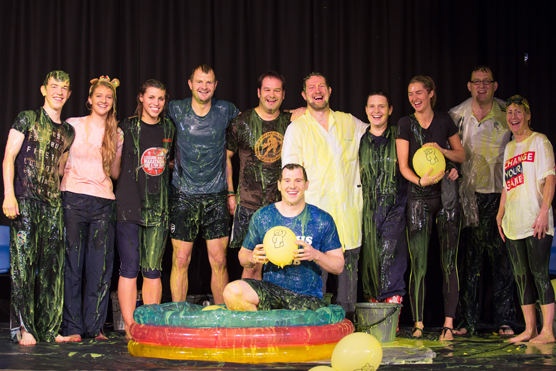 The Wallace High School helped change lives for disabled children and young people in the UK during their fundraising efforts for Children In Need last Friday. The whole school came together to watch popular faces within the school community ‘get their gunge on’.

Events in recent years have included a Red or Black extravaganza, space hopper races and sprint cycle races and the packed crowd in the Lisburn school’s Assembly Hall created a terrific atmosphere for this years participants.
Throughout the course of the week pupils gathered to buy over 1000 raffle tickets and ensure that numerous teachers would get gunged on the day. The teachers who put themselves forward to be gunged were Mr Alexander, Mr Glenn, Miss Topley, Mr Monteith, Miss Coughlan, Dr Halferty, Mrs Cousins and Mr Lowry, whilst Head Boy Neil Kilpatrick and Head Girl Zara Kirkwood also entered into the spirit of the day.

Expertly hosted by Year 14 student Nicola McIlroy and the remaining members of the charity committee, gleeful raffle ticket winners were brought to the stage to pour gunge over the poor participants with Mr Latham winning the lucky ticket to gunge Mr Lowry.

No face was to escape as the roulette wheel was spun and yellow gunge was poured! The successful drive to sell over 1000 tickets even resulted in a Mystery Guest making their way to the stage on the concluding spin. After much laughter, gunging, slipping and sliding the Mystery Guest was finally revealed to be Physics teacher Mrs Davison. 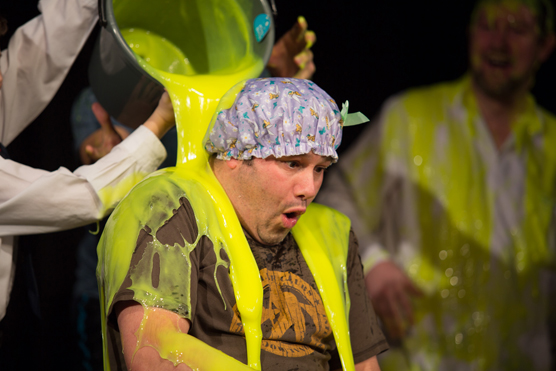 Laura Topley, Teacher in charge of Charity in the school was understandably delighted with the total raised and commented: “We always host a major event for Children in Need and this one was as always enjoyed by pupils and staff alike. It’s a great cause and one which we will continue to support.” 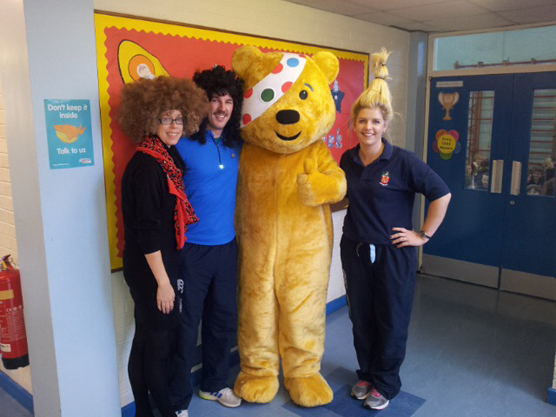 The Wallace Preparatory Department also got into the spirit by having a “Crazy Hair Day” which was supported by staff and pupils ranging from pre Prep to P7. All in all a superb total of £770 was raised by the school for this most worthwhile charity.

The school has also raised money for a wide array of other charities this year including the Kevin Pearce Fund, DBA UK and the annual Poppy & Wings Appeal. It is hoped that in the run up to the Christmas period, the pupils will endeavour to show continued generosity towards those less fortunate than themselves.