Pupils at The Wallace High School enjoyed a visit from Cool FM last Friday as part of the radio stations Cash for Kids Day in aid of the Northern Ireland Cancer Fund for Children.

The Lisburn school have raised over £90,000 for the local charity over the years and have established a close affinity through their fund raising efforts. Senior teacher, Miss Heather Gracey, has been instrumental in much of this fund raising and commented: “Our association with the Northern Ireland Cancer Fund for Children goes back to the late eighties when our first Read-On was held in memory of a student who had died. Within school we like to think that the funds raised have been a living legacy of Stephen’s life.” 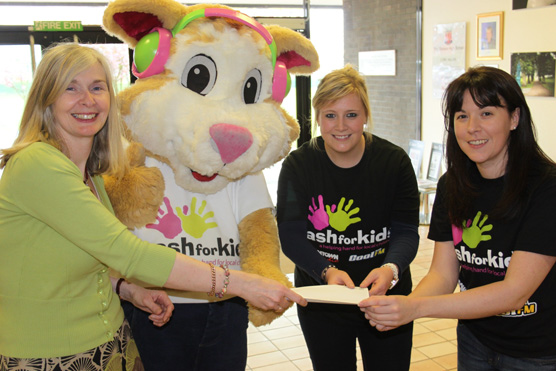 The pupils of 11W met Cool FM DJ Mairead Campbell and also the Cash for Kids mascot, as well as presenting a cheque for £500 to NICFC representative Ruth Hobson. These young people have a special commitment to the charity and have raised significant amounts of money over the past few years in memory of their class mate Briagh Hull who died almost two years ago. From bun sales to jewellery sales, fun runs to collections they have worked tirelessly to help other children and their families. 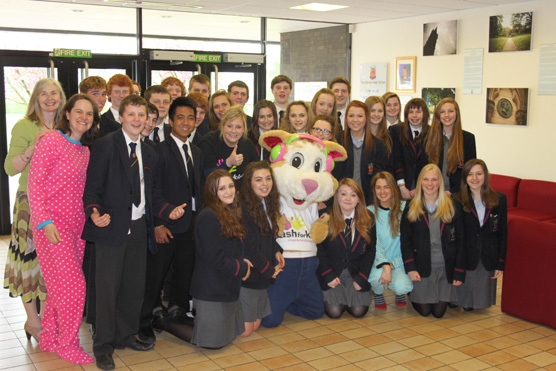 Charity co ordinators at the school, Miss Laura Topley and Mrs Liz McClenagahn, also got into the spirit of the occasion by coming to school in their onesies and “having funsie in their onesie”, a key part of the Cash for Kids Day throughout Northern Ireland. Pupils and staff were also interviewed by Mairead, whilst the pupils of 11W produced a noisy link to promote the event. 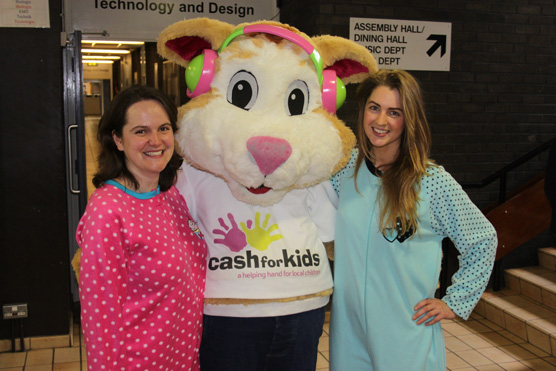 In all, the Cool FM Cash for Kids Day raised over £100,000 for this great cause and all in the Wallace community were delighted to be involved in such a great day for a great charity and wish to pass on their congratulations to Cool FM for their superb fund raising effort.

Jenny Johnston from 11W has been one of the driving forces behind the effort with her class mates and explains why the charity is so important to her: “NICFC will always hold a special place in my heart because of the support they gave to my best friend when she was terminally ill. It makes me so happy that the Cash for Kids Day has thrust NICFC into the limelight and helped them raise an outstanding £100,000 because I know that the money raised is going to a great charity.” 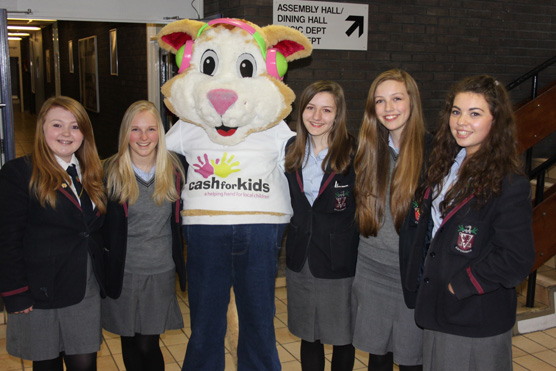 The Charity Committee at Wallace have been busy throughout the past few weeks and months with regular Monday collections recently held for Action Medical Cancer and the Alzheimer’s Society, as well as a bun sale for Year 14 pupil Priscilla Moore who is travelling to South Africa with the United Field Mission this coming summer. Year 10 pupils raised over £500 for Comic Relief with their now annual fancy dress mile of the school. Each individual Year 10 class also donated money to their own selected charity, decided on amongst class members. 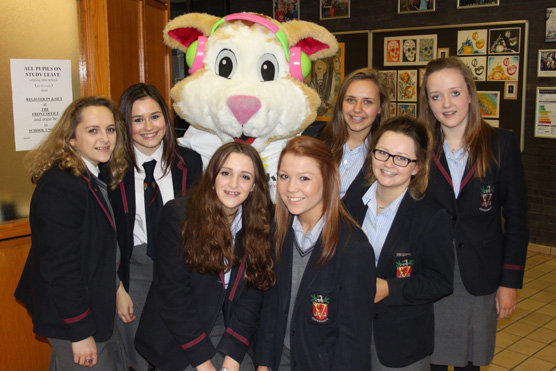 Preparations for the Habitat to Humanity trip to Malawi in June are nearing completion for the 12 pupils from Years 13 and 14, accompanied by staff Matthew Glenn, Laura Topley and Steven Alexander. They have undertaken a rigorous fund raising campaign involving quizzes, bag packing, coffee mornings and fashion shows for their two week trip where they will be building houses for orphaned children and also visiting and helping children in the local schools.

As part of the Habitat for Humanity trip and also to continue their support for the Northern Ireland Cancer Fund for Children, over 60 pupils and five staff are running in the Lisburn 10k and fun run in June, an event that they also supported last year. Training is well underway and everyone is looking forward to being part of this local event.