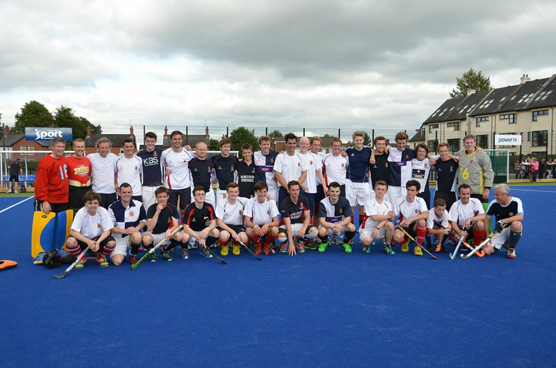 The Wallace Community is indebted to The Trustees and Sport Northern Ireland, without whose financial support the pitch would not have become a reality. Modelled on the London Olympic hockey “smurf turf” this is the first blue astro turf hockey pitch in Northern Ireland and provided a superb and unique setting for theday of celebration.

The day began with over one hundred local primary school children visiting to be coached by current Wallace pupils, several of whom who had just completed their final AS examination that morning. Schools present were Wallace Prep, Ballymacash, Brownlee, Pond Park, Lisburn Central and Magheralin with Pond Park Principal Geoffrey Cherry commenting: “The children thoroughly enjoyed their coaching session on these ‘state of the art’ facilities. The event was methodically organised and the calibre of coaching was superb. Our pupils gained much from the morning and it was another excellent link with Wallace and its feeder primary schools.” 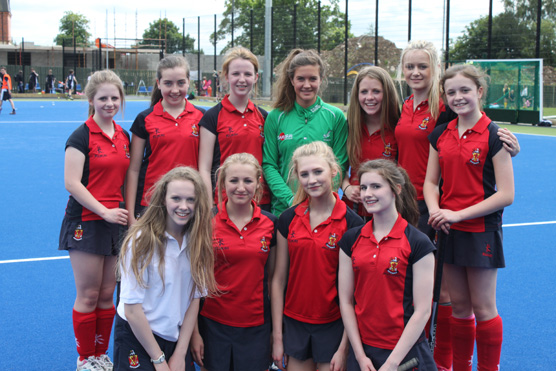 Vouchers were also presented to the two players who impressed the coaches most on the day (kindly sponsored by Total Hockey) with Julie Anderson from Magheralin and Ewan Patterson from PondPark delighted to be chosen.

A short lunch break was then taken before an exciting afternoon for the younger Wallace pupils who were coached by current Irish internationals Michelle Harvey (125 Irish caps), Peter Carruth (88 Irish caps) and former Wallace captain Daniel Buser who received his first cap last year as part of the team who beat the reigning Olympic champions Germany. Another former Wallace captain and Ireland player Stephen Hunter also helped with the coaching which was enjoyed by one hundred and fifty boys and girls who play hockey at the Lisburn school.

At 4.00pm the scheduled matches began with this years girls’ 1st XI playing against the 2011 team which reached the final of the Schoolgirls’ Cup. This turned out to be an exciting game which the current 1st XI won 3 – 2. with goals from Tamilla Matchett, Victoria Kennedy and Jasmine Kirkwood. It was great to welcome back captain Tessa Stewart and her players who had brought so much honour to the school in 2011 with their fantastic cup run.

Next up was a match between two teams, both captained by former students Daniel Buser and Raymond Geddis. This game featured many of the current players who had helped the boys’ 1st XI complete the McCullough Cup and Burney Cup double this season, as well as past pupils ranging from across several decades of hockey at Wallace. The team captained by Raymond Geddis won this game 5 – 3, whilst eleven year old Max Taylor, son of Jonny Taylor who was a member of the last Wallace team to achieve the domestic double, impressed as a member of the Daniel Buser team as he prepares to go into Year 8 in September.

The hard working PTA had organised a range of activities for all the family and were rewarded for their hard work as hundreds descended on the school facilities. From barbecues to bouncy castles, Zorbing to Batak, they had every base covered and helped to create a fantastic atmosphere for all present. Praise should also go to the Army who were present for much of the day with the Irish wolfhound proving a real attraction for the young people present. 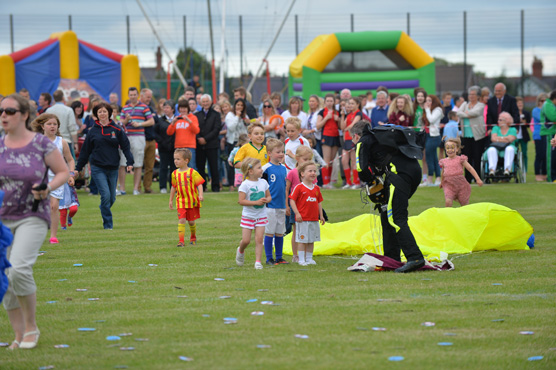 Perhaps the highlight of the day was the display by the Wild Geese sky diving team who at 6.45pm flew the match ball in for the final game of the night. Five sky divers dropped from the sky in breathtaking fashion and also landed on pre sold landing mats which constituted prizes generously donated by local businesses. They also flew in the Wallace flag and were surrounded by swarms of young people who were truly enthralled by what they had seen.

The Principal, Mrs Deborah O’Hare, hosted a reception for invited guests and was delighted to welcome among others Dame Mary Peters, The Trustees and Julie McCann from Sport NI to the event. In her speech to those assembled for the opening ceremony, Mrs O’Hare reflected “It has been quite a remarkable year for hockey in Wallace and it seems fitting to end such a successful year with what has been a day of celebration and enjoyment for the community.” As well as thanking the Trustees and Sport NI, Mrs O’Hare pointed out the significant efforts made by the school’s Bursar, Mr Robert Burns throughout the project “whose attention to detail and impeccably high standards have ensured that we have such a high quality facility.”

Sport Northern Ireland welcomed the new pitch saying: “Sport Northern Ireland is delighted to have supported Wallace High School in funding the 2G hockey pitch. It is great to see that our investment of almost £245k is providing value for money and increased sporting opportunities for our young people. Facilities such as Wallace High School are vital in increasing the number of children and adults experiencing, enjoying and participating in sport and physical activity.” 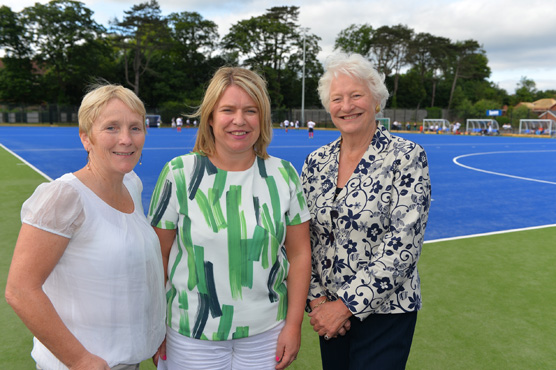 The evening concluded with Ulster Under 17 boys’ taking on their Scottish counterparts in the official opening match. Dame Mary was presented to both teams before the game which was watched by a large crowd who saw an exciting game which ended with a 3 – 2 Scottish win. Five Wallace players represented Ulster in this game, a special occasion for Year 13 pupil Ryan Getty and Year 11 pupils Scott McCabe, Andrew O’Hare, Jordan Taggart and William Carey. Jordan was understandably delighted to be part of the official opening match and commented: “Although we were disappointed to lose the game I know that all the Wallace boys were thrilled to be part of an Ulster team playing on our own home turf. We can’t wait to get playing on the pitch again and pre season can’t come soon enough. I would also like to thank Ulster Hockey and Scottish hockey for making this possible and for making it such a memorable occasion for our school.”

All in all this was a great day and a fitting way for Wallace to open the new pitch. The local community and generations of children at Wallace will benefit from the high quality facility.