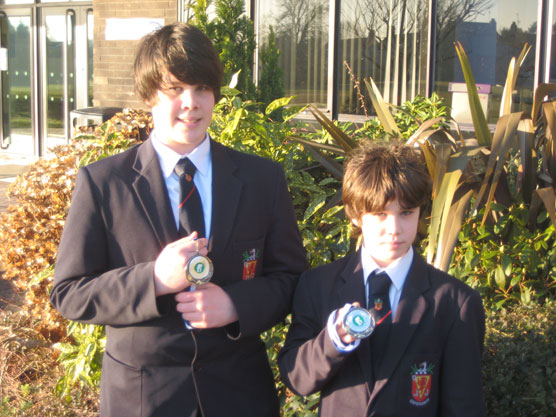 Whilst the weather has recently played havoc with outdoor sports at The Wallace High School, several pupils have achieved outstanding successes in other sports.

Lucy Scott, a Year 11 student at the school has enjoyed a busy and successful month in the swimming pool. First up was the Ulster Grammar Schools’ held at the Bangor Complex where she achieved a gold medal in the intermediate 50 metre butterfly and a commendable 4th place in the 50 metre freestyle.

Lucy, who attended a training camp in Tenerife over Halloween is now looking forward to events after Christmas: “I have enjoyed competing over the past couple of months and am pleased with my medal haul. I’m now really looking forward to the Ulster Secondary Schools’ in January.”

On the weekend of the Ulster Grammar Schools’ Adam Matthews (Year 13) and Peter Sands (Year 11) made the long trip to Galway to compete in the Irish Open Short Course Championships. This is one of the main swim meets of the national swimming season and being an open competition and not age grouped, meant that there was a very high standard of competitor.

Both boys acquitted themselves well. Adam reached several finals, gaining a bronze medal in the blue riband 100m freestyle event whilst being just pipped into 4th place by one hundredth of a second at the 200m distance.

Peter’s swim in the gruelling 1500m freestyle was the highlight of his weekend. His time of 17.04.13 placed him a very creditable 8th overall whilst setting a new club record – previously held by one A Matthews!! Swimming as part of the Lisburn City relay team, the boys also secured a gold medal in the 400m medley and silver in the 400m freestyle