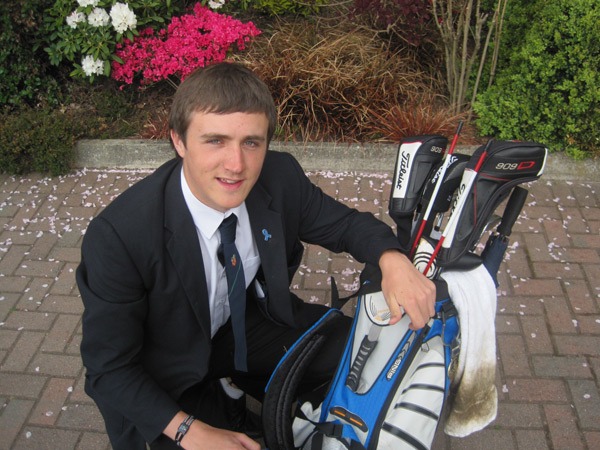 Matthew McKnight, an 18 year old from Lisburn is looking to follow in the footsteps of local professional golfers Graeme McDowell and Gareth Maybin by attending university in America next year on a golf scholarship.

The Year 14 pupil from The Wallace High School is currently fitting practice around his A levels before making his move to Bethuane – Cookman University in Daytona Beach, Florida.

Having taken up the game at Lisburn Golf Club eight years ago he finally realised his ambition last summer of attaining a scratch handicap. Matthew’s love of golf comes mainly from his father Gilbert, himself a handy player with a six handicap at Malone.

In the last year he has made significant strides, winning the prestigious Faldo Series at Lough Erne in September 2009, before tying 24th in the Faldo Series World Final in Rio de Janeiro in October.

He also captained his school team to Ulster Schools’ Winter League success, a first for the Lisburn school more readily associated with rugby, hockey and cricket, whilst he represented Ulster in the under 18 interpros last summer before injury wrecked his chances of international selection.

Whilst in America, Matthew plans to play for his university team and compete individually in the highly rated US amateur circuit.

Commenting on his move Matthew said: “Since taking up the game it has always been my ambition to go down the scholarship route and this represents a tremendous opportunity. I will also be studying International Business Management whilst there and the chance to get a degree whilst furthering my golf career was too good to turn down.

Ultimately I would love to play professionally but realise the hard work and sacrifices needed to even get close to that stage. I would also like to thank the many people who have helped me over the past eight years, particularly those at Lisburn who have been instrumental in my progress.”