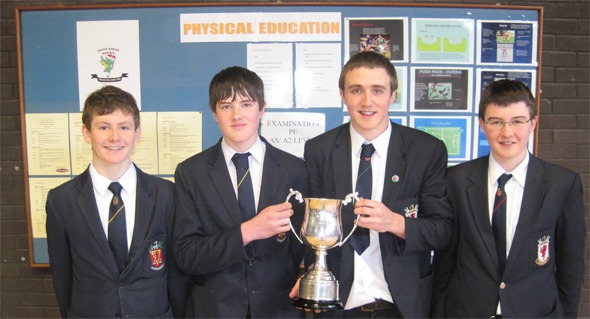 The Wallace High School senior boys’ golf team defeated St Macnissi’s College in the final of the Ulster Schools’ Winter League last Friday at Royal Portrush. The team, consisting of Jake Clements, Dale McIntyre, Hamilton Orr and captain Matthew McKnight triumphed in terrible conditions and also had to come back from being 8 down in the overall match after 9 holes.

Matthew lost 4 and 3 in his game, whilst Hamilton won 3 and 1 and Dale won 3 and 2. Despite Jake losing by one hole the overall match score was one hole up in Wallace’s favour, much to their delight.

Matthew has been accepted on a college golf scholarship to Daytona Beach University in Florida and is understandably delighted with his final contribution to Wallace golf: “This was a fantastic victory for us as this is the first time that we have won the title. Throughout the winter all five players in the squad (including John Spiers) contributed at vital times and helped us progress to the final.

The weather was against us but we really overcame adversity to triumph by one hole. I would also like to pay tribute to our coach Mr Latham whose sharp tactical mind was a major reason for the success.”