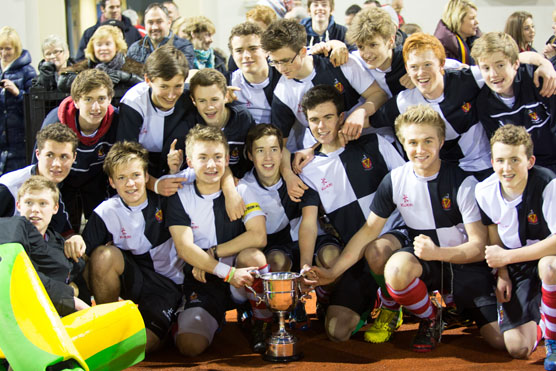 A large, four figure crowd turned up at Lisnagarvey Hockey Club with both schools well represented by spectators who helped to create a wonderful atmosphere. This was the first time that the two local schools had met in a senior final since 1959 when they contested the post Christmas Burney Cup.

Wallace went into the game as favourites after reaching the Irish Schools’ semi final in October and having already defeated Friends’ in the group stages of the competition. Certainly they started the game superbly and, only for the excellent goalkeeping of James Milliken (who went on to win the man of the match award) the game would have been over by half time. Milliken made several superb saves, notably from two Ross Kelly penalty corners and a couple of Daniel Nelson snap shots, whilst several reverse stick efforts went agonisingly wide. 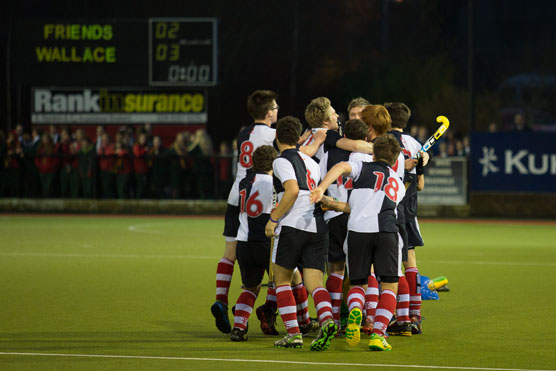 Either side of half time, Friends’ made inroads into what was otherwise a watertight Wallace defence, winning two penalty corners which were well dealt with by Wallace goalkeeper Fraser Rodgers. Milliken continued to perform heroics but was powerless to stop a Sean Murray penalty corner thunderbolt which gave Wallace a deserved lead. This was quickly followed up by a fantastic reverse stick finish from Daniel Nelson from a William Carey pass which looked to have put Wallace in an impregnable position. Friends’ deserve great credit for fighting their way back into the game and goals from Aaron Martin and Adam Marshall left the game on a knife edge.

With thirty seconds to go, a fast break from Wallace left forward Jack Wilson with a one on one with Milliken who produced yet another superb save to deflect the ball past the post.

Into extra time and Wallace continued to dominate. With two minutes to go in the first period, a reverse stick cross from captain Kelly was deflected goalward by Nelson, but Milliken produced another excellent save. The ball fell to Year 11 pupil Andrew O’Hare who produced an upright reverse finish to smash the ball past the Friends’ keeper from the tightest of angles.

The second period of extra time was controlled by Wallace who kept possession effectively and never looked in any real trouble. Again, the Wallace defence of Ross Kelly, Mark McNellis, Thomas McRoberts and Josh Curragh played superbly and limited their opponents to sporadic efforts which were well dealt with. Having said that, the final whistle was greeted with relief and the stream of supporters who ran on to the pitch told the full story.

This is the first time that the McCullough cup has resided in the Wallace trophy cabinet since 1988 when the team coached by Howard Thompson and captained by Marty Young defeated Bangor Grammar School. The win was particularly poignant in several ways; Sam McCullough, who donated the cup passed away during the year and a minutes silence was impeccably observed by all those present before the game which was, as expected played in a terrific spirit. Captain Ross Kelly also mentioned former Wallace teacher Bill Wilson in his speech after the game and dedicated the victory to Bill who was a great supporter of all sport at the Lisburn school.

Speaking after the game Ross said:”The lads have worked really hard for this victory and have been a pleasure to captain. We were so close at the Irish Schools’ to getting to the final and vowed after the game to win the McCullough Cup to make up for the disappointment. To do so is absolutely brilliant and fully deserved, although Friends’ made it difficult, especially coming back from two goals down, when we really had to show character. I would also like to thank our supporters who really helped us on the day and the reaction in school since has been unbelievable. Finally I want to thank our coaches and all the staff who coach hockey in Wallace, we couldn’t have done it without them.”

The Wallace team will now enjoy a well deserved break over the Christmas period, before embarking on their Burney Cup campaign. They will be hoping to continue to re write the history books and bring that trophy back to school for the first time since 2001. All players and coaches involved wish to thank all the supporters who were present last week and everyone who sent messages of support before the final and congratulatory messages afterwards.

There are over 80 Photos of the match on the School’s Facebook Page.