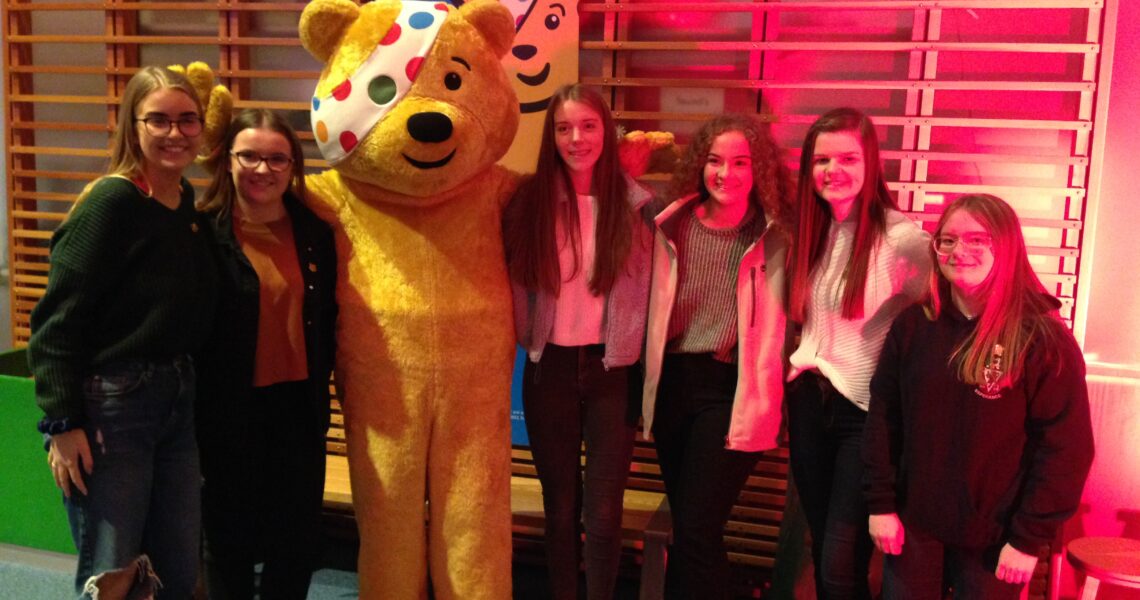 Who would ever thought that World Kindness Day would fall on Friday 13th? Suddenly, a date which sounds like a dodgy “horror flick” this year became associated with a much cuddlier image. Pudsey, the iconic yellow bear, is almost as recognisable as the golden M of McDonalds and was looking as youthful as ever for his big 40!

Has a year ever made such a difference? In 2019 two of our Year 8 students ( Holly and Jack Hutchinson) charmed viewers across the UK whilst our sixth form Charity Committee got to meet Pudsey himself when we attended the BBC extravaganza at the Odyssey in Belfast. Sadly, even fundraising for Pudsey is subject to Covid 19 regulations and just as the BBC had to scale back and improvise so did we!

The cherished traditions of “ Pie the Teacher” and the legendary Wallace bake sales with Pudsey cupcakes will hopefully return in 2021 but we still had fun on the day. “Strictly” enthusiasts will know that the show’s professionals had been teaching some fancy footwork to celebrate Pudsey’s big day so a challenge was issued to pupils to prove they were worth a 10 or a drawled “fab…U…lous” from our armchair Facebook fans! Katie Johnston of 9W showed she had all the moves but not to be outdone our Senior Prefects showed that they had plenty of energy to bring to the floor.

As it was World Kindness Day three lucky Year 8 pupils had their birthday (or their style) celebrated with unexpected gifts whilst Mrs Rodgers was equally delighted to receive something more bubbly! We are still counting our final total but we expect to be able to give at least £1,000  to each of the chosen charities – Children in Need and the Poppy Appeal.

On behalf of the charities we are supporting Wallace says a big “Thank you”. Let’s look forward to a fun-filled event in 2021!