The Mayor of Lisburn & Castlereagh City Council, Councillor Thomas Beckett, along with the Chairman of the Leisure and Community Development Committee, Alderman Paul Porter recently hosted a reception at Lagan Valley Island to celebrate the sporting success of Wallace High School.

Last year was a particularly successful one for sports at Wallace. The boys’ 1st XI hockey team retained the Burney Cup defeating Banbridge Academy in the final in a thrilling match and also supplied many players to Ulster and Irish underage teams. In rugby the 1st XV also supplied many representative players to underage teams and, after a thrilling run to the Danske Bank Schools’ Cup final, were defeated narrowly by RBAI in the St Patrick’s Day showpiece at the Kingspan Stadium. Also in rugby, the Medallion XV reached the final of their cup where they were also defeated by RBAI with the game played in front of a large crowd at the Kingspan, another terrific occasion in the school calendar last year, whilst the under 15 cricket team were victorious in their cup final in the last week of the summer term, Regent House their vanquished opponents. 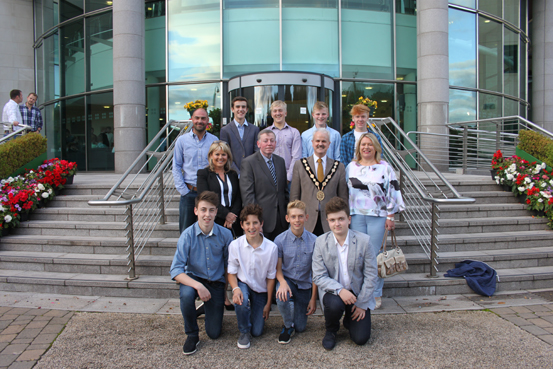 Coaches from all these teams were present, whilst some of the junior captains from rugby, boys’ hockey and cricket were also invited along in recognition of their own contribution to school sport in the junior school. Under 13 hockey captain Max Taylor was one such pupil and described it as “an amazing opportunity to mix with the more senior pupils who I enjoyed watching in finals last year and who I would love to emulate.” It was also a fantastic way for last year’s Year 14 Leavers to get together before many head away to university.

After photos on the scenic steps of the Island Centre, the Mayor, Councillor Thomas Beckett welcomed everyone to the evening and congratulated all present on their successes last year both as teams and individuals. Alderman Paul Porter also spoke on behalf of the Leisure and Community Development Committee about the importance of sport in our area and how proud the community were of Wallace’s sporting achievements last year. Presentations were then made by the Mayor, Councillor Thomas Beckett to Mrs O’Hare and from Alderman Paul Porter to Mrs McCabe which are now proudly on display in the school. The evening concluded with a superb meal and with all present mixing freely in a relaxed atmosphere.

Delighted to welcome the Principal of Wallace High School, Mrs Deborah O’Hare and the Chairman of the Board of Governors, Mrs Sandra McCabe, along with team members of the rugby, hockey and cricket teams, staff and coaches, the Mayor, Councillor Thomas Beckett said, “It gives me great pleasure to host this reception to celebrate the sporting success of Wallace High School and to acknowledge the dedication to sport. The array of talent is absolutely outstanding and I would like to extend my congratulations to all those involved and praise the pupils, staff and coaches for their commitment to their chosen sport. I have no doubt that with the same level of hard-work and determination already demonstrated, that sporting success at Wallace High School will continue to excel.” 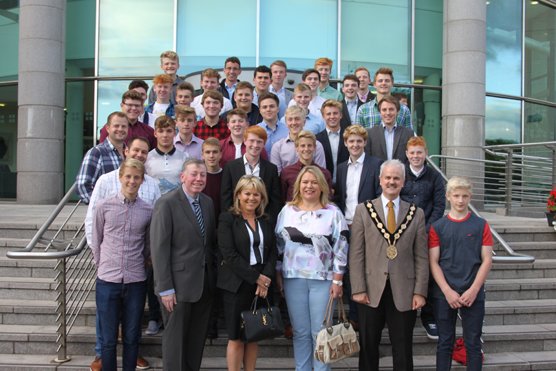 Chairman of the Leisure and Community Development Committee, Alderman Paul Porter also commented, he said, “I would like to congratulate the players, staff and coaches of Wallace High School on their sporting success and their devotion to school sport. It is great to see a local school accomplish so much success across several sporting disciplines, and for players to get the opportunity to not only compete for their school but represent their province and country, it is truly fantastic. As we all know, this level of achievement requires a high level of enthusiasm and commitment and I would like to commend everyone involved.”

Commenting on the evening, Mrs O’Hare said: “It was a very enjoyable evening and all those present were made to feel very welcome. The sportsmen were each commended for their dedication, talent and success by the Mayor and Alderman Porter. Such recognition shows how effective this committee is in its responsiveness to and interest in the outstanding sporting achievements of Wallace.” 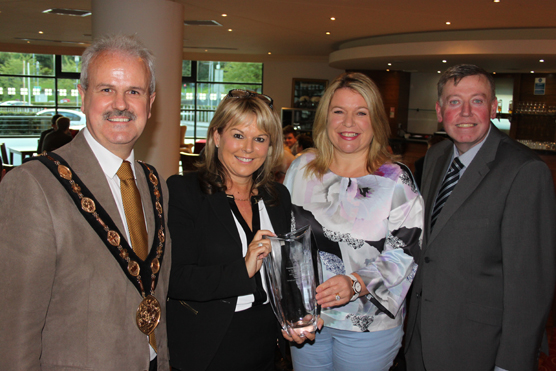