The Board of Governors of The Wallace High School recently announced its decision to build a new sand dressed Competition Hockey Pitch adjacent to the grammar school. The need for a hockey pitch in the area is long overdue and the Board of Governors at Wallace have, after considerable planning and discussion, released the details for this exciting project. The tendering process is underway and the successful contractor will commence work during the summer with completion set for the end of September 2012.

Sports Development Fundraiser at The Wallace High School, Mr Richard Lee, has come up with an innovative approach to raising funds for the completion of the pitch (phase 1) and further down the line the construction of floodlights (phase 2) which will enable the facility to be used by community and sports’ club use as well, by introducing a “Sell a Square” campaign.

Commenting on the scheme, with each square costing £20, Mr Lee said: “The response since launching the ‘Sell-a-Square’ campaign has been very positive, and we are certainly indebted to parents and pupils who have supported the campaign in the early stages.  However, the majority of squares are still unfilled and we are calling upon remaining parents, former pupils, school staff and local businesses to help us to achieve our fundraising goal of having all squares purchased.” 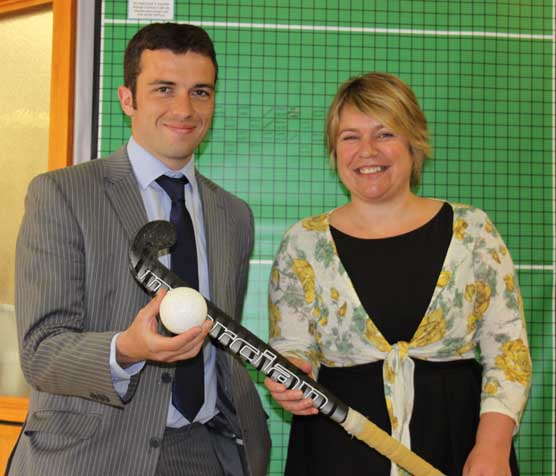 Mr Lee added, “We have erected a floor to ceiling banner in the school reception area, and marked out a hockey pitch divided into the squares on the banner.  It is nice to see pupils along with school visitors showing a lot of interest in the mocked up pitch – it has almost become a daily task amongst the pupils to find new names on the banner.”

Anyone wishing to purchase a square can send their donation for the attention of Mr R Lee, Sports Development Fundraiser, The Wallace High School, 12a Clonevin Park, Lisburn, BT28 3AD.  Cheques should be made payable to “The Wallace High School” and anyone wishing to donate by direct debit should email [email protected] for further information.  Once the school receives your donation, the name of choice will be put into a square on your behalf and after the pitch is constructed a permanent board of donators will be displayed prominently in school.

There will also be opportunities for local businesses to advertise at the site and any enquiries or expressions of interest should also be directed to Mr R Lee.