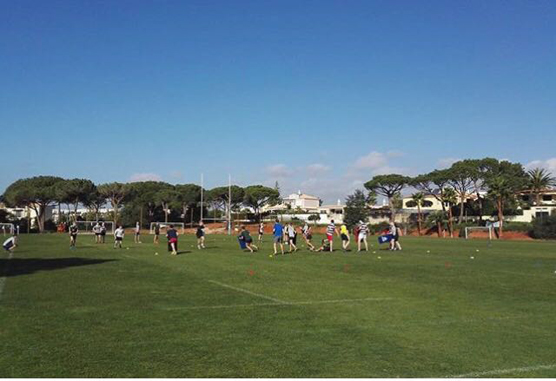 The Wallace High School senior rugby squad have recently returned from a very successful training camp in Portugal. The tour party consisted of 24 pupils and 3 staff with the group spending four nights in the impressive surroundings of the Browns resort in Vilamoura. Browns has been used in the past by several international rugby teams as well as teams from other sports as preparation for major competitions.

Each day began with focus and purpose as the boys participated in an early morning gym session before breakfast. Temperatures during the pitch sessions before and after lunch averaged an enjoyable 22 degrees. The cool down sessions in the outdoor pool provided much needed recovery time whilst the evenings were spent engaging in team building exercises and meetings to discuss different aspects of skill development and performance.

A break from the routine on day three saw the group head to the beach at Vilamoura. The almost deserted beach (as it was too cold for the locals!) was the perfect backdrop for a conditioning session followed by a dip in the ocean. It also provided an opportunity for Year 14 students to video some sketches for Christmas Pie!

After a long trip the group arrived home just before midnight on the 12th December 2016. The pupils on the trip would like to offer a sincere thanks to the teachers and coaches for the opportunity to train in Portugal. Mr Latham, P.E. teacher and rugby coach, commented that, “The behaviour off the pitch and attitude to training on the pitch was first class.”

The staff would also like to thank parents for their ongoing support of senior rugby and this training camp!