Participants from Years 12,13 and 14 showcased their Technology projects to panels of judges, engineering professionals and university graduates in order to compete for the various prizes that were up for grabs. Adam Murray and Timothy Irvine, both Year 13, presented their submarine communication app and were both awarded with Gold CREST certificates. Judges said of the project that there was no product like it currently on the market and that it was much more efficient and safe for crew than the current submarine telephone system in use on most vehicles. 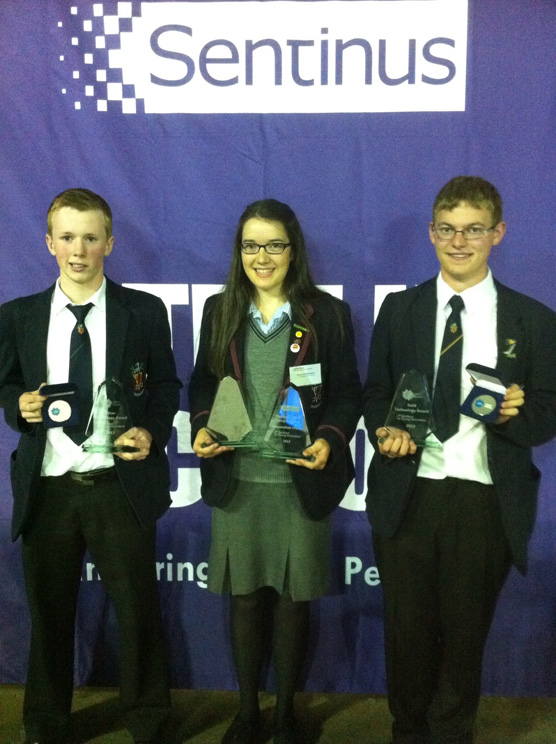 Ross Currie in Year 12 was awarded top CREST award in his age category and received a trophy. He designed and manufactured the Dispensa-ball in order to encourage young people into golfing and to help people with mobility problems enjoy the game. Ross thoroughly enjoyed this project as it combined two of his most key interests – golfing and Technology. Michael Jennings of Year 14 also received the top CREST award including trophy in his age group for his scrolling display kit which would allow businesses to increase their advertising at a fraction of the price. Judging panels found the product to be easy to use, very reliable and they liked the fact that it had such low energy consumption.

The biggest Wallace winner of the day, however, was Rebecca Nettleship in Year 12. Rebecca was delighted to be awarded the RLC Langford Award for Control Systems as well as the prestigious title of Northern Ireland Intermediate Young Engineer 2013. Rebecca’s project was designed with the Backin’ Belfast campaign in mind. She produced a project highlighting the main tourist attractions in Belfast in an attempt to help revive tourism and boost the economy in the city. Rebecca received much praise from judges as well as a high level of interest from the students and visitors who attended the exhibition. Other Wallace High School student’s awarded with gold CREST certificates included Darren Taggart Year 14, Gemma Houston Year 13 and Rebecca Sloan Year 12. Well done to all students involved, with this type of recognition for their work we can only expect great things from them in the future!