Still reading after all these years 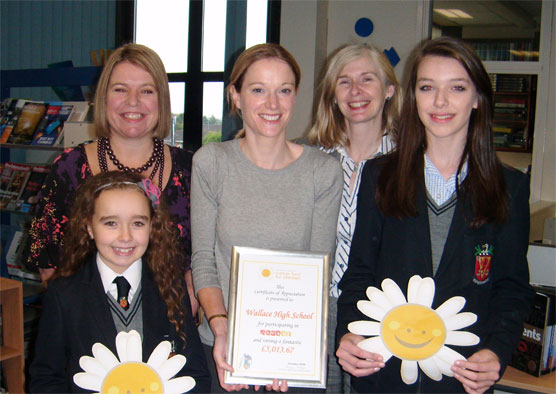 Wallace High’s “Read-on” assembly on Monday 18th October represented a special celebration in the middle of a fortnight devoted to the promotion of literature. Events began on Wednesday 13th October when members of the book club accepted an invitation to attend the launch of the Northern Ireland Book Awards at RBAI.

This lively event included a quiz, the announcement of the shortlisted books and a presentation by the author Chris Bradford who was on a week’s visit to Northern Ireland. Chris, the author of the celebrated Young Samurai series, visited Wallace on Thursday afternoon when he enthralled pupils with a dazzling display of sword skills and other martial arts.

The presentation included a reading from his novel The Way of The Warrior and authentic footage from a Japanese high school. Despite the flashing blade of the sword all pupils left with their limbs intact and enthused by the inspirational multi media show. Wallace librarian Mrs C O’Neill noted “Author visits are genuinely inspirational for pupils. They provide an amazing insight into the creative process. Chris really gave the pupils a sense of his passion for the Orient as well as his passion for writing.”

The Read-on assembly saw top fundraisers Briagh Hull and Stephanie Clokey present a cheque for £5,013.67 to Rachel Burgoyne schools’ worker with The Northern Ireland Cancer Fund for Children. Wallace has a long association with the fund having held the first of its eleven sponsored reading events in 1988 in memory of a pupil who had died during his GCSE studies.

Principal Deborah O’Hare paid tribute to the achievement of the pupils in Years 8 and 9 which she said reflected the spirit of generosity for which the school is known. She added “particular thanks are due to Miss Gracey for co-ordinating the scheme over many years, to Mrs O’Neill for managing this year’s event, to the English teachers for facilitating the scheme, to the Bursar’s staff for counting every penny and most importantly to the pupils for their enthusiasm and commitment.”

Whilst the school had a particular link to this charity Wallace prides itself on the range and scale of its charitable commitments, co-ordinated by the school’s charity committee under the inspirational leadership of Miss Grace Bill.

Accepting the cheque Rachel noted that the Wallace community has given £89,290 to the fund, a total which is unparalleled. As an expression of the charity’s gratitude she presented the school with an engraved crystal trophy which was accepted with much pleasure by the Principal.

Reading events will continue with a “Reading for pleasure” week in the English Department. Head of Department Miss Gillian McGarry, a finalist in next week’s UK teaching awards ,said “As English teachers we are passionate about books and we really want our pupils to have the chance to develop their own reading tastes and to share those tastes with others.”