Over twenty years after their first sponsored reading event Wallace pupils have recently raised an astonishing £6,053.39 for the Northern Ireland Cancer Fund for Children. This takes the school’s total for fourteen Read-on events to just short of £90,000. Gillian Creevy who heads up the charity’s work described Wallace pupils as “inspiring”.

Much charitable work emerges out of tragedy and Wallace’s commitment to NICFC was a result of the death of a pupil in his GCSE year. As a tribute to his memory and in an attempt to support others experiencing similar hardships the English Department organised their first sponsored event which raised over £5,000. This year’s event is sadly reminiscent of that first event as it too commemorates a pupil who left her mark upon the lives of her fellow students. Year 10 students made a magnificent contribution to the school’s overall total and also designed and sold bracelets in memory of their former classmate and friend Briagh Hull. Read on organizer Heather Gracey noted ” Briagh was an inspiration to us. During our last Read on she was a Year 8 student and despite her illness she managed to be the top fundraiser in Year 8. We, as a school family, are proud to donate this money in her name and in her memory”.

The teaching staff also took the opportunity to support the fund by holding “hug in a mug”, an event best described as calorie laden. Teachers, both male and female, donned their aprons, got out their mixing bowls and produced an array of mouthwatering treats for others to eat. The event raised £270 and generated lots of recipe swapping, promises to repeat the event next year and a new title for Biology teacher Dr Liam Halferty…King of the Cupcake!

A special assembly will be held in the near future to hand over the presentation cheque and to give NICFC’s representative an opportunity to outline the exciting plans for new facilities at the charity’s holiday home and residential facilities in Newcastle.

Enthusiastic Harry Potter fans may have found their hero Daniel Ratcliffe’s recent foray into Gothic horror a little too frightening for comfort. Lisburn’s own weaver of spells and magic, Paul Ormonde will deliver a less sinister but equally compelling evening when he performs his illusion show at Wallace High school on Saturday 17th March.

A long time member of the Magic Circle Paul will be partnered on stage by the magician’s essential accessory, the assistant with Lisa Whitcroft acting as the second half of this stage pairing. Paul performs a wide range of tricks and illusions varying in nature and type. Paul and Lisa perform Houdini’s classic escape, Metamorphosis and they will also demonstrate the thrilling illusions of the music hall era with the Zig Zag (saw the lady in three!) and the Levante Sword Cabinet. Yet more gruesome is the Chung Ling Soo headchopper routine when a lucky member of the audience gets to take part!

In a nod to more recent spectaculars Paul also performs a Darren Brown style routine, focused on the mystery of the mind. There are, of course, many delightful traditional sleight of hand style tricks which to younger members of the audience will truly be magical.

Paul and Lisa pride themselves on providing an evening which genuinely deserves the title “family entertainment”. From 6 to 16 to 60 and beyond the show has something for all ages. Audience participation is a key element and supporting acts will provide music, song and dance. All proceeds from the show will be divided equally between the Northern Ireland Cancer Fund for Children and The Briagh Hull Memorial Fund. Tickets cost £6 or £20 for a family ticket and can be purchased from Wallace High School. It is hoped that sponsorship of the event will maximise the benefits for the charities. 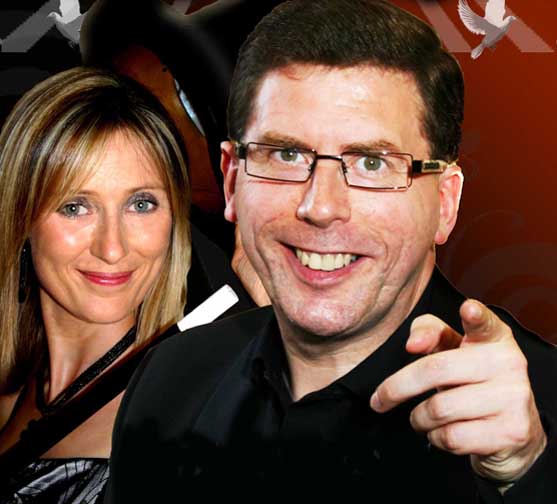