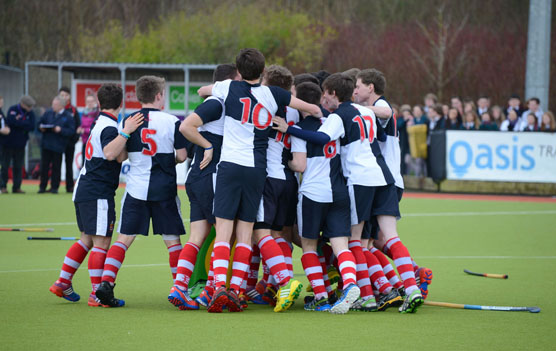 Having won the pre Christmas McCullough Cup against neighbours Friends they knew that it would take a monumental performance to defeat Banbridge who were chasing a record fifth Burney success in a row. That they did it in such dramatic style was a credit to the team who remained unbeaten against all Ulster schools throughout the year. 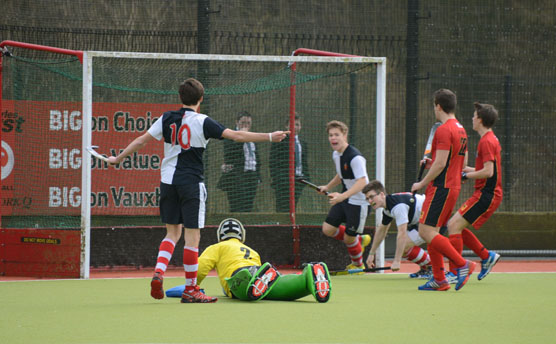 Wallace got off to a dream start when they scored right from the first whistle, Jack Wilson latching onto a Sean Murray pass before cutting through the Banbridge defence to tee up Daniel Nelson for an excellent scooped finish over the keeper. Within minutes they were also denied a penalty stroke when Wilson looked to be upended by the opposition keeper.

Banbridge fought their way back into the game and midway through the half had got themselves into a 2 – 1 lead after some sloppy Wallace defending and this was the way it remained until half time.

Into the second half and Wilson drew Wallace level with another superb run which resulted in him burning several defenders before skilfully lifting the ball over the Banbridge keeper who was, at that stage, playing the game of his life. However, they fell behind again when a hopeful cross was met at the far post and a calm finish meant that Wallace were once again chasing the game. Daniel Nelson, Ryan Getty and Andrew O’Hare were all denied by the excellent Justin Glass who produced a string of heroic saves.

With thirty seconds to go and the ball in the bottom left corner it looked likely that Wallace would fall short despite dominating possession, territory and chances created but, as they have proved throughout the year, they somehow won a penalty corner which Irish under 21 player Sean Murray calmly converted at the second attempt with the last play of the game.

This seemed to lift the large crowd from Wallace who sang their hearts out in extra time as the boys looked for a winner. Goalkeeper Fraser Rodgers produced an outstanding save in the first period of extra time for Wallace, whilst O’Hare was unlucky again not to score the winner when he was denied by another stunning save.

Penalty strokes are never a good way to end any game, let alone a cup final, but the Wallace players had practiced in the build up to the final and coped admirably with the pressure. Man of the match Wilson converted first for Wallace before a stunning save from Rodgers denied Banbridge captain Jonny McKee. Murray scored to make it 2 – 0 and when captain Ross Kelly scored the third and Rodgers again saved the Banbridge third stroke, Year 11 pupil Andrew O’Hare stepped up and converted to win the game for Wallace and send the supporters ecstatic. 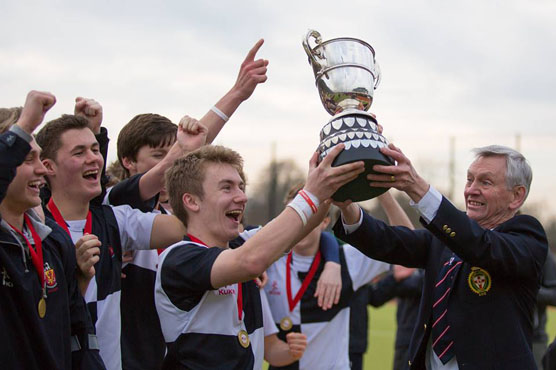 This is the first Burney Cup success since 2001 and only the second double in the schools history, the last double achieved in the 1988/89 season when Mr Howard Thompson was the coach and was thoroughly deserved for a group of players who have shown commitment and a positive attitude at all times throughout a long season.

It is fitting to leave the last word to captain Ross Kelly who, along with several of his Year 14 team mates, also attended their formal on the night of the game and has been an outstanding leader throughout the year: “To win the double and in such dramatic fashion is absolutely brilliant and the players deserve all the success this year. We have worked really hard and knew that we would have to be at our best against a determined and talented Banbridge team trying to win the Burney for the fifth time in a row.”

He continued,”We said straight after the Irish Schools’ semi final defeat against St Andrew’s that we would aim to go through the season unbeaten in Ulster and to achieve that is an unbelievable. For me to then go to the formal with several of my team mates who I have played with for the past six years really topped off the day. I would also like to thank our coaches who have worked so hard for this success and throughout many years at school.” 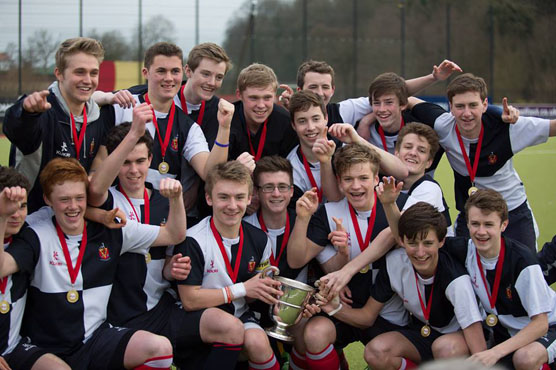