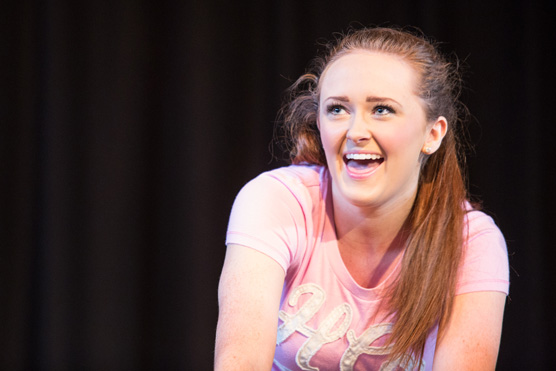 Wallace High School has gone purple in aid of Pancreatic Cancer Awareness Month. Ribbons are being sold in both the Preparatory and the Grammar school in affectionate remembrance of a much loved and recently retired member of staff Mr Bill Wilson. Earlier in the year a very successful Picnic on the Pitch was held as an awareness raising event. Pancreatic cancer remains the most elusive of cancers to detect and tragically is usually fatal.

Wallace hosted their annual Children in Need fundraiser last Friday in the Assembly Hall with staff and pupils taking part in a Roller Race challenge.

Children in Need got underway on Thursday as staff used their free periods to take part in a sponsored spin throughout the day with pupils guessing the total number of miles cycled. Year 8 pupils Hannah McMath and Rachel Patterson guessed correctly with 190 miles and each received a £15 iTunes voucher. 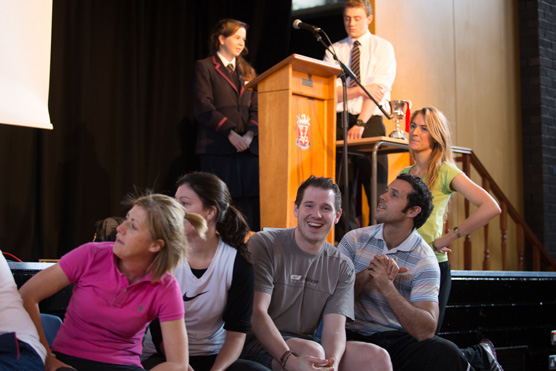 Friday’s special event was the Roller Race challenge.  A capacity crowd packed the Assembly Hall to cheer races between Mr Mallon and Mr Alexander, Mr Latham and Miss Coughlan, Miss Topley and Miss Stevenson, Head Boy Chris Robinson and Head Girl Rebecca Lafferty. The final race saw rugby captain Callum Irvine pitted against hockey captain Ross Kelly. Callum was the overall winner of the challenge which contributed greatly to the final total of £700 which will go towards this most deserving of charities. Special mention should also go to Joe Henry from Velo Cafe who supplied the fixed bikes and helped with the running of this event.

Other charities continue to benefit from the generosity of the Wallace school community through the weekly collections undertaken by the hard working Charity Committee under the leadership of Miss Laura Topley. Recent beneficiaries include the Poppy Appeal, Northern Ireland Cancer Fund for Children, MS Society, Alzheimer’s Society and Diabetes UK. Following on from the successful Habitat for Humanity trip to Malawi last summer, the school are also supporting ASHA as their international charity this year with a group of staff and pupils visiting India in October 2014.

December will also see the now annual Christmas in a Box hamper appeal led by Mrs Jude Hawthorne. This appeal sees mainly junior school pupils providing hamper items which are then put together and passed on to the Women’s Aid in Lisburn.

Commenting on the recent charity events Miss Topley said: “‘It always amazes me how generous our Wallace school community is when it comes to charity with pupils and staff alike getting involved in so many ways. The Children in Need event was as popular as ever and great fun with hundreds packing into the Assembly Hall. We are also delighted to be supporting ASHA as our international charity after the success of Malawi last summer.”

There are more photos of this event available on our Facebook Page.