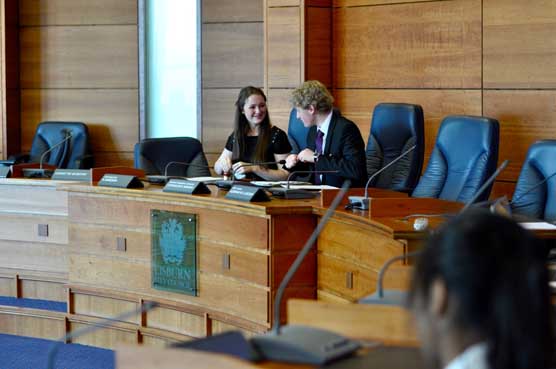 MUN began at Wallace four years ago when Mrs Ferguson asked her English class if any of them fancied a trip to an MUN conference at Methody. ‘It was one of those casual questions that might easily have never been answered’ says Jonathan Scott, ‘Instead it lead to the establishing of an MUN Society in school, trips to Conferences, building strong ties with other MUN groups, and finally to holding our own conference.’

Alexandra Philpott, Co-Secretary General with Jonathan, points out the range of activities that go on each week in an MUN Society: research, debating, writing briefing papers, design work, filming, negotiating, journalism, and raising money for UNICEF.

For Alex, the best part is the satisfaction of seeing younger pupils developing in confidence and an awareness of the world while they enjoy themselves, as well as the way it breaks down the artificial barriers between year groups. She feels that this is what makes MUN different; pupils from all years work together, on an equal basis, with real friendships being formed.

Recalling the weeks leading up to the conference, she said, ‘You know it is a success when you pass a group of junior pupils discussing the situation in Syria while they eat their break, and they call you over to ask you your opinion and then point out, very politely and helpfully, where you have got it wrong!’

Strong friendships develop on the MUN circuit and the idea of a joint conference was born last October when the two teams decided to draw up a proposal to put to their school principals. Ralph Lavery, Jonathan Scott and Alex Philpott were the key people at Wallace, and they were determined that their legacy to the school, before they left for university, would be establishing the tradition of MUN conferences at Wallace. 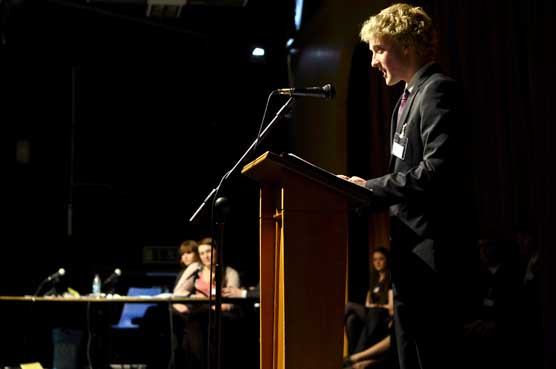 Friday night meetings over fajitas and green thai curries, with fabulous puddings provided by one of the parents, lead to one of the most successful and enjoyable conferences ever held in NI.

Mrs Karen Ferguson for Wallace, and Mrs Ngaire Robinson for Methody, were able to stand back and let the young people organise and run the conference.

‘We were both so impressed by their professionalism,’ said Mrs Ferguson, ‘In the spirit of MUN the teachers are meant to be there simply to facilitate the event – they should take no part in the decisions or the running of the conference. Very often this ideal is hard to achieve. On this occasion however, despite the practical difficulties of separate locations and the pressure of A level and GCSE studies, as well as music and sporting commitments, the young people successfully staged an event that would have challenged many professional organisers’

Cara Milton-Edwards from Methody, and President of the General Assembly, spoke about the challenges and rewards of organising the conference.

‘On Friday evenings there were ten very different and persuasive personalities around the table thrashing out the issues to be debated. Any one who becomes involved in MUN develops a passion for debate, for justice and for the areas they think are of paramount importance. We had to work together to agree a programme of issues that gave a fair representation of the difficulties facing the world today, and that would excite the interest of the delegates attending.

One of the most interesting evenings was when Commander John Gray of the Royal Navy joined us and challenged us to come up with an emergency situation that would draw all the threads together for the climax of the conference.’

As a symbol of the co-operation between the two school, Wallace pupil Mikhail Kondrashenkov, year 8, designed a badge that combined the Wallace red lion, the Methody maltese cross and the logo of the United Nations, while Patrick Creber in year 11, used his IT skills to produce the finished version.

Dromore High School, Friends’ School Lisburn and B.R.A., as well Wallace and Methody, fielded teams representing 22 countries from around the world. Friends’ and B.R.A. also gave great support by each providing a guest committee chair to help run debates and assist in the difficult task of awarding the final prizes. 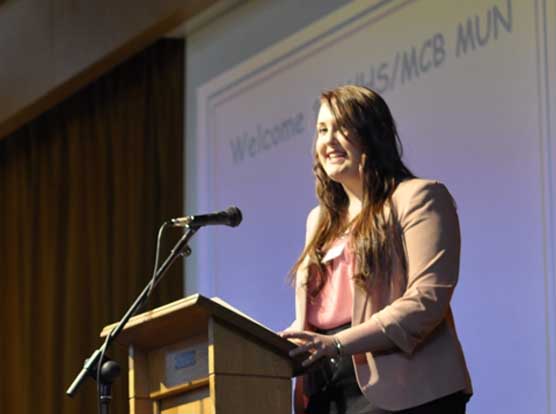 The Conference was opened with an inspiring speech by Alexandra Philpott in which she pointed out that ‘Esperance’, the motto of The Wallace High School, means ‘hope’ – and keeping hope alive is only meaningful in situations when it appears there is none, and yet we continue to strive and seek a way forward; a principle essential to the work of the United Nations.

Judith Fawcett of the United Nations Association was the keynote speaker and she talked about the impact conferences such as these have on the world, and how many young people go on from MUN to work for the United Nations where they make enormous contributions to the lives of others around the world. She remained with us for most of the day and was very impressed by the quality of the debate

Moving Image Arts’ student at Wallace, Patrick Gardiner, volunteered to provide the visual material for the conference, as well as being tasked with making a film of the day. In a break after the final award ceremony he commented: “As an observer and a documenter of the day’s proceedings, I was captivated by the high level debate and the in-depth knowledge of the delegates. I was delighted to have the opportunity to record the event and had to try very hard to restrain myself from grabbing a microphone and declaring my views on the Syrian crisis!”

Patrick’s first assignment was to provide the film footage and sound track for the emergency scenario that would challenge the nations at the General Assembly.

Delegates were shocked by a catastrophic earth quake on the Iran-Iraq border, followed by a tsunami in the Persian Gulf. Breaking News reports showed mass migrations of people fleeing the natural disasters, major disruptions in oil supplies, the leaking of nuclear materials into the atmosphere above the northern hemisphere, and religious and national conflicts erupting into armed responses from the affected nations.

The General Assembly had an hour and a half to formulate a response to the crisis threatening to end life as we know it. Happily, the nations of the world succeeded on this occasion.

Before you get the idea that it as all serious, MUN also has its funny, at times hilarious, side too.

The documentary film made by Patrick of the whole event includes interviews, not just with our keynote speaker, but also with the chairs of committees, including Aaron Meredith (Methody) and Adam Barnes (B.R.A.) who discussed the importance of fashion at MUN (their hair styles said it all). Henry Brett (Methody) was invited to explore the problem of bribery and corruption at the UN and reminisced about better times when he could have expected to be bribed with a candlelit dinner for two, or even a pineapple, but was disappointed to have received only an out-of-date Chicken Pot Noodle and a tea-light; the recession clearly bites deep.

Supporting the delegates was the impressive team of Runners who carried messages between Delegations in General Assembly and in the Committees.

Aaron Callaghan for Wallace, and Richard Tweed for Methody co-ordinated press and filming, and Aaron and the press team accompanied the Security Council to the Island Centre where, as the guests of the City Council, the delegates, chaired by Jonathan Scott and Natasha Midgely, were able to hold the Security Council debate in the Council Chamber. This was a very special occasion and the WHS MCB MUN Committee are very appreciative of this wonderful opportunity and the welcome they received from Councillor Stephen Martin.

Aaron Callaghan was one of the first to join MUN at Wallace. He took responsibility for planning the venue and all the technical wizardry needed to make the Security Council and General Assembly run smoothly. His comment sums up the enthusiasm and commitment given by all those involved with the event: ‘Model United Nations is a fantastic organisation to be involved with. I have loved everything from the pre-conference preparations to the filming and technical aspects on the day. I’m thrilled our first conference was such a success.’

After the award ceremony, the closing speeches by Jonathan Scott and Cara Milton-Edwards were  both challenging and moving. They touched on the importance of what had been achieved in just one day and how that would influence the days and years ahead for all those present, and the future of MUN in Ireland, both North and South.

A fine meal and a social evening followed where everyone enjoyed themselves, and before the band played their last song, plans were already being made for the next WHS MCB conference to be held October.