Wallace had beaten Methodist College 15-5 in the quarter final and RBAI 14-13 in the semi and travelled to play Campbell looking for a hat trick of victories over the big three Belfast schools.

In the final it was the Andrew Cardosi show, as he scored all the points for Wallace in a man of the match performance.

Campbell started brightly and quickly went into a 3-0 lead as they used their big forwards to get over the gain line. Mid way through the half Wallace put together a number of phases and Andrew Cardosi landed a close range penalty. However it was Campbell with a converted try who scored next and they enjoyed much territory and possession at this stage of the game. Defensively, Wallace were stretched and in a major momentum change they restricted Campbell to no further points before half time. Much credit must go to Connor Guiney, Sam Moore, Andrew Irvine and Adam Galashan who tackled and bossed the breakdown superbly to keep Campbell to a 10-3 half time lead. 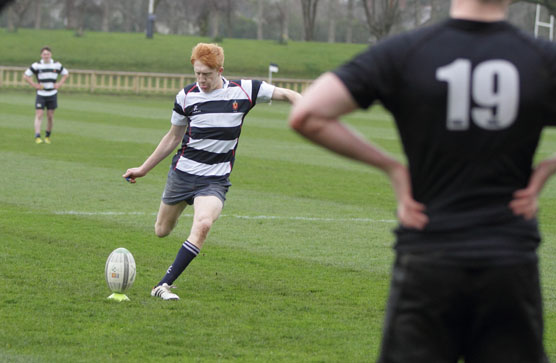 After half time a rejuvenated Wallace started to impose their game plan on Campbell through the accurate decision making and kicking of captain scrum half Neil Kilpatrick. Along with Andrew Cardosi, they masterminded a shrewd territorial game. The front row of Michael Smith, Andrew Weir and Adam Black began to get parity up front and along with Paddy Ferguson and Tom Baird started to win the gain line battle through sheer physicality.

Wallace broke through the Campbell defence with a powerful Andrew Cardosi break who then side stepped the full back to score under the posts. Cardosi added the conversion and a further penalty.

It was a sublime piece of skill from Cardosi that put Wallace out of reach with a fantastic drop goal in the twenty two, ten metres in from the left touchline.

The victory left Wallace ecstatic and capped a superb rugby season for the school with 1stXV losing by three points in The Schools’ Cup Semi to MCB and the 3rdXV losing in a cup semi final replay to RBAI. The victories of the U13XV in the BRA tournament and U12XV at the Coleraine and Down HS tournaments give much hope for the future.

Stockdale and Hylands Rewarded for Performances 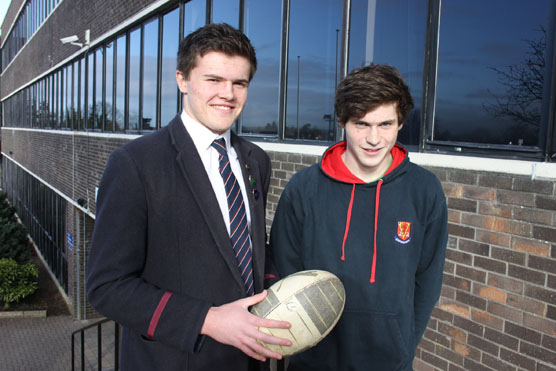 1stXV centre Jacob Stockdale has won Danske Bank Ulster Schools’ Cup Player of the Tournament for his excellent performances in the Wallace cup run. Full back Philip Hylands also picked up top player of both semi finals. Both players received a £100 cheque from Danske Bank.

The Wallace High School would like to wish Jacob Stockdale all the best as he travels to Poland this week to play for Irish Schools U18 in the European FIRA Tournament.

Sixteen Wallace players have been drafted into Ulster Rugby underage Easter Training Programmes. These programmes are aimed at bringing together the best rugby players at each age group for assessment with regard to the 2014 Interprovincial Series. The players include: