The Year 8 concert took place on Tuesday 25th of October. Nearly 700 people came to support our pupils in one of their final stages of induction.
Each Year 8 class played a four-chord song (except for set 6 who sneaked in a fifth chord!) Each set also had one or two soloists who were all very talented (and very brave!)

The evening began with an upbeat, grade three piano piece played by Rachel called, ‘Allegro.’ Rachel was followed by Melissa and Alisa who performed a lovely rendition of, ‘Lost Boy,’ originally sang by Ruth. Altogether, set one performed James Blunt’s, ‘You’re Beautiful’ with an array of musicians and vocalists making it a truly beautiful piece. Sarah played, ‘A Little Flower’ on piano and the class sang, ‘Let it Be’ by The Beatles. This class was comprised of 6 female vocalists, 4 pupils on keyboards, 4 pupils on guitar, 2 pupils on the double bass, 1 pupil on a drum kit, 2 pupils on bass guitars and with an opportunity for audience participation on the final chorus, it definitely wasn’t a time of trouble. 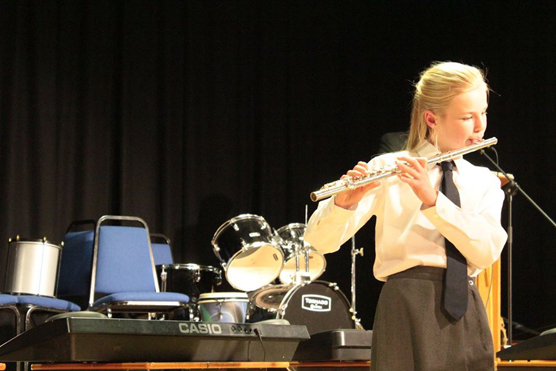 The third class set showed us we, ‘don’t need dollar bills’ to have fun with their performance of ‘Cheap Thrills’ by Sia. Again, there was a range of singers and musicians on show and the addition of Miss Pascoe on the cowbell made this a truly epic number! Following the whole class’ performance, Ethan played, ‘Summertime Blues’ on piano and Lucy performed, ‘Tre Giorgio son che Nina.’ Jessie J’s ‘Flashlight’ was next on the agenda. The singers and some of the band even lit up the stage with their phone torches for the last chorus. Following this, was a violin duet by Genevieve and Eliza of, ’What shall we do with the Drunken Sailor?” The talented pair incorporated a mixture of melody and harmony throughout. After the girls’ sea shanty, Josh played, “Indian Pony Race” on piano.

Set five moved mountains and broke rocks with The Script’s, ‘Hall of Fame’ whilst Yasmin played, ‘Clown Dance’ on flute and Noah played, ‘The Entertainer’ on piano. In fact, Noah’s performance was of such a high standard, I nearly fainted when I discovered he only started lessons at Easter! Miley Cyrus’ ‘Wrecking Ball,’ performed by set 6, was next whilst two soloists from this set were Isaac, who performed, ‘The Entertainer’ on his flute and Katrina, who performed, ‘La Rotta’ on her violin. 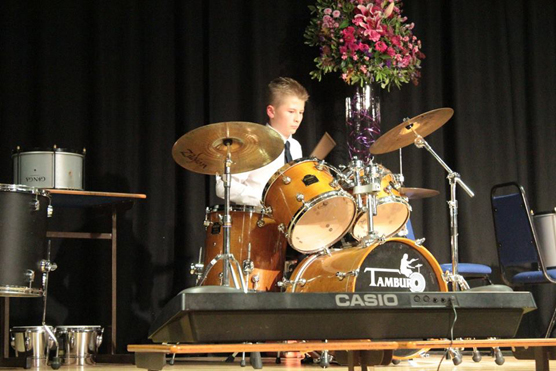 A Miley Cyrus song was featured again but this time, it was set seven’s rendition of, ‘Party in the USA.’ Their soloist, Jennifer performed a piano piece called, ‘Tickety-boo,’ who played exceptionally well and any added nerves certainly didn’t get the best of her. ‘Demons’ by Imagine Dragons was the piece of choice from set 8 and there was certainly nothing demonic about this performance! Holly followed up with, ‘Le Petit Nègre’ on piano and Adam performed a Rock School exam piece, ‘Buzz Saw,’ on his guitar.

The night moved swiftly on to set 9 performing Taylor Swift’s, ‘Bad Blood’ and then we were entertained with a self-composed drum solo by David reaching the finale with Emma playing, ‘Flashback’ on her trumpet. Our current year 8’s are definitely a very talented bunch. In the years to come, I’m sure we’ll get to hear them progress as musicians and I’m very excited to hear what they’ll have to offer as the Year 8 concert demonstrated tremendous potential.

Written by Katy, a Year 12 pupil on the WHS Pupil Press Team.