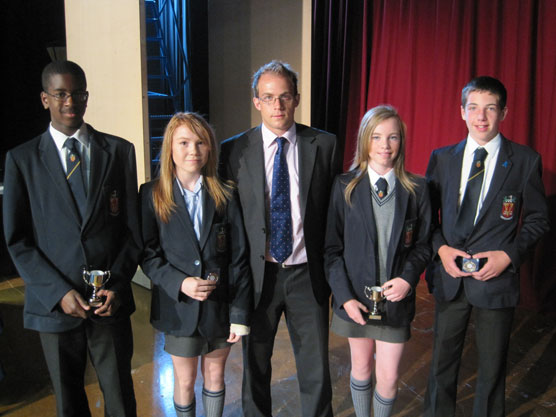 The Wallace High School held their annual Sports Awards Ceremony on the last day of term and welcomed past pupil Timmy Cockram back to the school as the principal guest and to present the awards.

It was an appropriate time for Timmy to come back as, three days later, he was awarded his 100th Irish international hockey cap versus France. He was understandably delighted to return to Wallace where, as a pupil, he was an integral member of the cricket and hockey 1st X1 teams which won the prestigious Schools’ Cup and Burney Cup: “It is a real honour to be asked to present the awards at this special ceremony. I remember, as a pupil, looking forward to this day and wish to congratulate the many talented award winners. I would also like to thank my employers, McKinty and Wright, for letting me attend and for their continued support with my own hockey career.”

A large crowd gathered in the Assembly Hall to see pupils receiving a variety of certificates and trophies. Colours were awarded in the many senior sports played within the school, whilst other pupils received certificates of achievement for their performances in their chosen sports. Representative honours were also celebrated in the traditional school sports, as well as Graham Malley (Judo), Matthew O’Connor (Gymnastics), Natalie Burns (Mounted Games), Anna Jones (Squash) and Adam Matthews, Lucy Scott and Peter Sands (Swimming).

The climax to the Sports Awards included presentations to Individual Sports Day winners in Years 8 – 11 and then the overall House trophies which were won this year by Hamilton (Boys) and Gracey (Girls). Year 9 pupil Alannah Stephenson was also given a standing ovation as she picked up the coveted Northern Bank Trophy for Sporting Excellence. This was just reward for an outstanding year in which she represented Ulster and Ireland at both under 15 and 17 level, as well as winning a string of individual and doubles titles in Ireland and beyond.

Head of the Physical Education Department, Neil Hinds, was delighted that the event proved a fitting end to what has been a successful sporting year for the school: “We have enjoyed a tremendous year with many teams and individuals achieving outstanding success and this is our way of celebrating the achievements of our pupils.

There have been many memories which will stick in the mind for a long time to come; the boys’ hockey 1st X1 reaching the Irish Schools’ and McCullough Cup finals, the Medallion rugby sharing the Shield and the 1st XV reaching the semi finals of the Schools’ Cup, the girls tennis team who won the Ulster Schools’ Junior A Cup for the first time, the Senior Golf team who won the Ulster Schools’ Winter League and the Year 9 girls badminton players who were crowned Ulster Schools’ Cup and League winners and then went on to claim the All Ireland title. I would like to congratulate all prize recipients and look forward to another packed and successful school sporting year next year.”