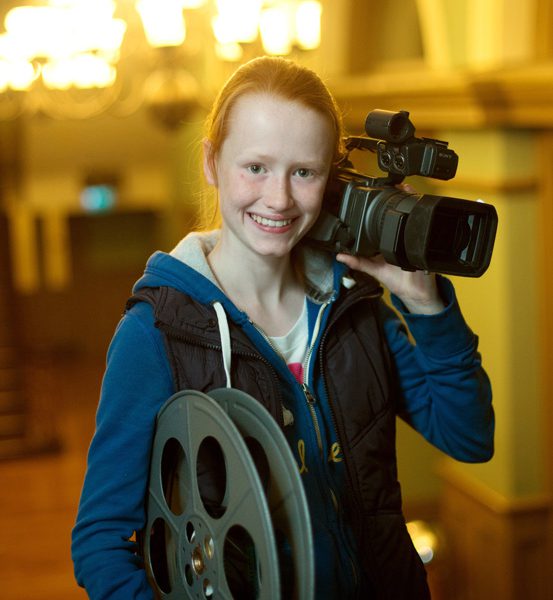 Two aspiring young script writers will have their dreams realised this week after scooping the top prize in the recent NI Broadband ‘Super Short’ competition, in association with BT and Cinemagic.

Fourteen year old Dorothy McDowell from Enniskillen and twelve year old Amy Warke from Lisburn have won the chance to transform their winning short stories about fibre broadband into a movie by working with a team of professionals at a Cinemagic film workshop this week.

They will be assisted by eight other finalists from the competition under the direction of local film makers Patrick Maxwell and Michael Lennox. Over the course of the week the competition participants will discover how to bring a story from script to screen, covering elements such as script development, cinematography, creating film sets and camera technique.

Both movies will be officially screened at the Cinemagic Gala Awards 2013 in November and will also be uploaded to the NI broadband website.

The BT and Cinemagic ‘Super Short’ competition challenged entrants to write a 500 word story illustrating how high speed fibre broadband can transform people’s lives either by helping someone to make a difference, achieve a dream, overcome a problem or make a connection.

Dorothy’s entry depicted a scenario in which a fibre broadband connection helped a young girl connect with friends after moving to the countryside; while Amy’s story illustrated a situation in which fibre broadband helped to save a young boy’s life.

Commenting on the competition, Frank McManus, head of wholesale sales and services in BT Northern Ireland said, “The aim of the ‘Super Short’ competition was to highlight the benefits of high speed fibre broadband and at the same time encourage young adults to think about the ways in which this leading-edge technology is transforming the world. We’re delighted with the creativity of all the entries and look forward to watching the winning short movies on the big screen later this year.”

Claire Shaw, press and marketing officer, Cinemagic said, “Cinemagic will be guiding the young people over the course of five days to produce the two short films from script to screen! They will get the chance to storyboard, decide on locations, cast, direct, shoot and learn about audio and lighting throughout the five day challenge. We are looking forward to working with the young people to help develop their creativity and filmmaking skills and celebrate their achievement in November at the festival.”

Northern Ireland’s high speed fibre broadband network is one of the most advanced in Europe. Delivered by BT as part of its £2.5 billion roll out plan in the UK and also its partnership with the Northern Ireland government, the network is open to all communications providers on an equivalent basis, allowing customers to choose from up to 24 internet service providers offering a range of competitive offers and packages. For more information on how to upgrade to superfast fibre broadband visit www.nibroadband.com