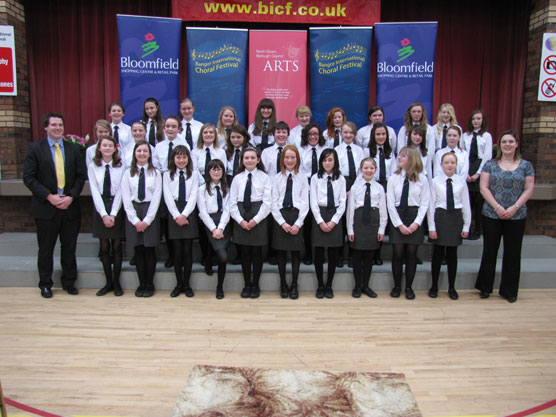 Cantabile faced some stiff competition but despite meeting highly polished choirs of more than one hundred in number and extremely high quality choral ability we performed exceptionally well and were highly commended with a score of 85%.

Adjudicator Jeffery Wynn Davies applauded pupils on their ‘testing choice of pieces’ which challenged the vocal ability of all choir members, singing in four parts at times. Pupils were also congratulated on being the only choir in the competition who decided to contrast an Irish folk song by a local composer with a more up tempo and enjoyable piece.

I feel that everyone has gained from this experience both vocally and in terms of confidence. I am extremely proud of all members of Cantabile and would like to thank all pupils for their hard work and dedication over the past few months! In addition, I would also like to sincerely thank Mr Steven Alexander for accompanying Cantabile and for all of his efforts, advice and support since September.