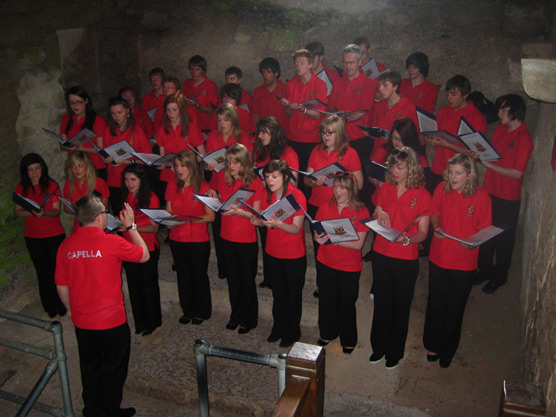 Last summer, 40 members of Wallace High School’s Capella embarked on their first concert tour to the Cork. Capella was also accompanied by the Past Choristers, who were performing alongside them and independently at the different venues. Staying at the fabulous 4 star Imperial Hotel, Capella’s experience of Cork was truly amazing.

Their first visit was to Fota Island Wildlife Park, where wild animals roamed free. The weather was beautiful, and the choir returned to Cork city relaxed and ready for the first performance that evening.

St Fin Barre’s Cathedral in Cork is built after the design of Chartres Cathedral. It is 2/3 shorter than it is tall, giving a feeling of grandeur and spaciousness inside. The Organist and Director of Music, Coleraine born Mr Malcolm Wisener gave a short talk before the concert and then it was down to business.

The concert programme remained the same for all the concerts in County Cork and can be seen below. Highlights included Stanford’s Motet ‘Beati Quorum Via’ Faure’s ‘Cantique de Jean Racine’ and McGlynn’s arrangement of ‘Fionnghuala’ The concert received great praise and the standard of performance was excellent.

The next day was spent in Blarney Castle, giving a recital in the oldest hall of the castle before a light lunch and off to Youghal, where the evening concert took place. Visitors and staff at Blarney were delighted with the surprising mix of a cappella music drifting around the old Norman edifice.

The evening concert was organised by the Office of Public Works and was a great success, with a nice tea served at the interval allowing the choir to meet the audience. The audience were unable to contain their surprise that Capella was a school choir, consisting of school students as the standard of performance was much higher than they’d expected. This was followed by Pizza in a local pizzeria, a well deserved treat after another successful day.

The following morning, suitcases packed, a good breakfast and off the Cork’s famous English Market for a short performance. Once again, Cork people were genuinely impressed with the standard of the singers, and the fact that they were singing a few pieces so competently in Irish.

Back on the bus, and home to start the summer holidays. It was the final tour for Mrs Mitchell who has now retired from Wallace. Mr David Falconer, who organised the trip, commented: “Having been as far away as the USA last summer, this trip was no less enjoyable.

The people of Cork were tremendous. I would like to wish Mrs Mitchell all the best for her retirement and thank her for her continued support over the years. I would also like to thank Miss Bill and Mr McGeown for their help in making the trip so successful, as well as Mr Saunders for playing so creatively, managing difficult instruments in a short space of time, and for his general bonhomie.”

Capella is the senior chamber choir at The Wallace High School. Students are invited to join this small chamber choir after showing potential to sing to the required high standards. This year the choir is very large due to the demands made by the repertoire. The choir has 45 members, is SSAATTBB and includes students from ages 14 to 18.

Capella can be heard on: