On a Monday afternoon, in September 2008, Mr Falconer made the announcement that Capella was to hit the streets of New York for our end-of-year tour.

While there was much to be excited about, there was also lots of hard work to be done. Many new pieces were to be learnt, and some old favourites (need I mention “Dulaman”?) had to be learnt by newcomers, with only nine months to do so, on top of everything else that GCSE and A-Level students must prioritise, including the difficult task of coming up with (and carrying out!) original fundraising ideas . But, we did it! On June 24th, we turned up at the gates of Wallace High School, suitcases in tow, just hoping that the bathroom scales were right and that the suitcase did only weigh 19 kilograms, eagerly awaiting 2.15 pm (New York time), when we would touch down in the States.

Upon arrival in Newark, we were whisked away onto a coach for a further three hours of travelling to reach our first destination – Boston, Massachusetts. Since the only food we had eaten that day was breakfast, and plane food, we decided to go in search of hot food. I can only imagine how pleased the waiters were to see fifty hungry teenagers.

Next morning, we hopped onto another coach for our very own tour of Boston, during which we made pit stops at the Public Library, Harvard University, and the harbour where we even got on to a World War II navy boat. Soon after, it was time for our first performance in the Old North Church, where we performed McGlynn’s Christus resurgens, Dulaman and Gaudete, Britten’s Hymn to the Virgin, Suantrai, Mary’s Magnificat and Allegri’s Miserere.

The Honours group also performed as a separate group with two of Rutter’s Childhood Lyrics. For dinner, some of us headed to the famous Sam’s Café, where everybody knows your name… And, in keeping with a Capella tradition, we did a spot of spontaneous singing on the side of the street, after which we decided it was time to start heading back to the hotel. Of course, we managed to retain a less fun tradition –not knowing our way back. We got there eventually, around half past midnight or so. 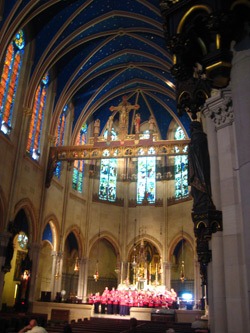 On Friday morning, we were onto another bus by 10 a.m., ready to hit the Big Apple. On arrival in New York, we went on a walking tour to see the sights. We went to Times Square, to shop and take multiple photos, and spent a considerable amount of time in Macy’s Department store. We had intended to climb to the top of The Empire State Building, but unfortunately there was a lightning storm that night, preventing us from doing so.

On Saturday, we left the hotel and walked to St Mary’s Times Square to begin our rehearsals for our first concert in New York. During the very short break between the rehearsal and the concert, some of the choir found the time to squeeze in some shopping, keen to make the most of their trip to Manhattan.

The concert, which began at 1.15pm, consisted of our full repertoire, which included all of the pieces we performed in Boston plus the impressive Gloria by Rutter. It went spectacularly, and I can honestly say that it was the best performance that I have experienced in my 3 years in Capella.

After the performance we piled into the small shop across from the church to buy our lunch, which we ate in Central Park. After lunch, we spent a few hours shopping in FAO Schwarz, Abercrombie and Fitch and various other stores on Fifth Avenue. Since the weather had cleared up since Friday night, after dinner we made our way back to the Empire State building and queued up alongside many, many other people for a couple of hours until we reached the observatory platform. While the climb was tedious at times, it was well worth it to see the city that never sleeps all lit up against the backdrop of the night sky.

Next morning, we made our way to Grand Central Station to do another performance. We waited in the front hall while Mr Falconer went to find out exactly where we would be singing. We found out that we weren’t technically allowed to put on a concert, but we went ahead and sang Gaudete, Christus resurgens, Dulaman and Miserere in the entrance hall. We may have been pushing our luck with the Miserere though, as it was fifteen minutes long, however, the security guard was kind enough to let us finish before telling us to stop.

During the afternoon, we went on a guided bus tour to see the New York sights that would be a little rough on the feet to walk to. We saw the Statue of Liberty from a viewing point, where the Honour’s group sang The Owl and the Pussycat and Thomas Tallis’s If Ye Love Me. After, we made our way to Ground Zero and St Paul’s Church, the only building in the area not affected by the tragedy. It also acted as a sanctuary to those in need, and contained letters of hope from all around the world and photos of those lost. There, we sang Hymn to the Virgin, which felt especially poignant and left few of the choir with dry eyes.

That night, we headed back to Times Square to decide what we were to do for the night. The original plan was to see a Broadway show, but as some people didn’t want to, and we wouldn’t all be able to get tickets, we decided to split into separate groups. Some went to the cinema, some went to an off-Broadway show “The Fantasticks” and some went to see “Avenue Q”. The shows were unbelievable and it was fantastic to have been a part of the Broadway experience, especially as we had been unsure whether we would be able to get any tickets at all.

All too soon came Monday morning. We awoke early to do our packing before getting the subway to 116th Street for our final performance in St John’s, the largest cathedral in the world – an extremely impressive building. During our performance here, we sang the Miserere and Hymn to the Virgin, the Honours Group performed If Ye Love Me and the boys gave another rendition of Dulaman. After we finished up we got talking to some of our audience, who had actually travelled all the way up to see us in an actual concert after hearing us in Grand Central Station! We spent the rest of the day doing some last minute shopping before making our way back to the hotel to catch our bus to Newark airport. We even managed to squeeze in some more singing before boarding the plane for an overnight flight back to Belfast.

The whole week was an amazing experience, and we were very privileged to have been given the opportunity. Thanks to all who supported us during our nine months of fundraising and the teachers – Mr Falconer, Mr McGeown, Ms Bill, Mrs Mitchell and Mr Saunders – for making the trip possible.