Wallace High School pupils have proved yet again their success as fundraisers. At special assemblies held in the school pupils heard the charity’s schools’ fundraiser Ruth Hobson describe Wallace pupils as Northern Ireland’s top fundraising school. In the current school year pupils have banked £7, 313 for the fund and that figure takes no account of sponsorship for the recent Lisburn fun run when over forty pupils participated in memory of former student Briagh Hull.

Wallace has a long association with the Northern Ireland Cancer Fund for Children. Teacher Paul McCabe began his journey of support for the charity as a 17 year old pupil; his fundraising over many years has seen him replicate Houdini’s stunts most notably escaping from a straitjacket!  This year, under his stage name Paul Ormonde , he performed to a packed venue raising almost £2,000 for the charity and Briagh’s Memorial Fund.

In the 20 plus years that Wallace has been involved in Read On the school has raised an amazing £91,000. In her presentation Ruth told her attentive audience of the very real benefits sick children and their families will experience because of the generous donation from the school. 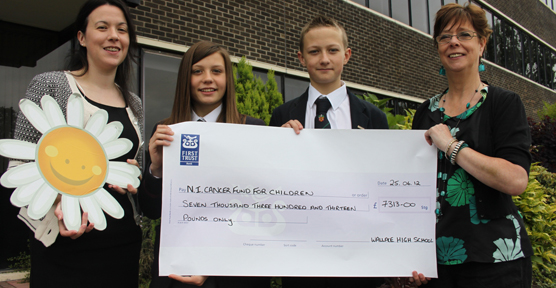 The top fundraisers in Year 8 and 9 were Nikhita Dowie and Jamie Dowie and in Year 10 Bethany Henry, Jenny Johnston and Rachel Noble represented the Year group. The girls, along with Ruth Hanna, have played a key role in fundraising in Briagh’s memory. Currently the school is working with renowned local artist Ross Wilson to create a piece celebrating Briagh’s life and are looking forward to its unveiling during the next school year. 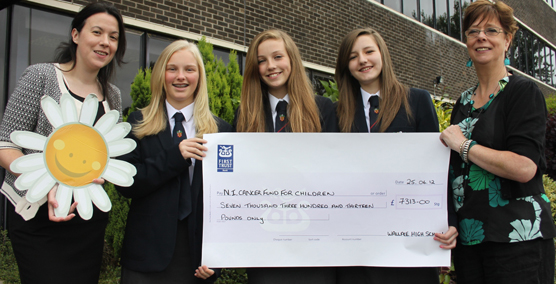 Principal Deborah O’Hare said ” Wallace students are well known for their commitment to charitable causes. We know from experience the marvellous work the charity does and we look forward to continuing our association with the charity.”

The top fundraising class 8V will visit the charity’s facilities in Newcastle in the Autumn term to see for themselves the results of their giving. 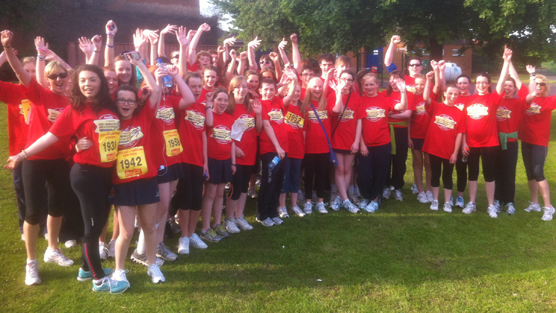 The charitable spirit of school was very evident at the resent Lisburn fun run, with over forty staff and pupils participating to raise money for the Northern Ireland Cancer Fund for Children and the Briagh Hull Memorial Fund.