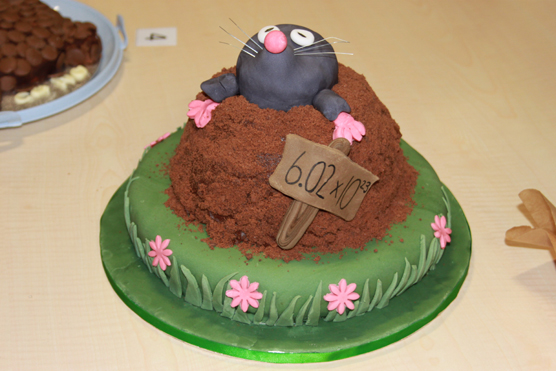 With the array of cakes that were enjoyed by our students on Monday, Mole day provided a fantastic opportunity for the Chemistry department and its students to delight in Mole Day. However, this was no excuse for a treat, with Mole Day commemorating Avogadro’s Number (6.02 x 1023), which is a basic measuring unit in Chemistry. Quite simply, Mole Day was created to foster interest in Chemistry. Celebrated annually on October 23rd, schools throughout the world celebrate Mole Day with various activities relating to chemistry and/or moles.

There were many festivities that our students took part in as the Chemistry Department in Wallace celebrated Mole Day on 24th October 2016. Year 8 pupils played ‘Pin the Nose’ on Avogadro and had a ‘Colouring in’ Competition, with many pupils finding it a refreshing way to celebrate Chemistry before the Half Term break. Year 9 played ‘Periodic Table Bingo’, emphasising that mastering the periodic table can indeed be a fun task. We may not have had the infamous Chris Tarrent to host, but Year 10 were equally engaged with a game of ‘Who Wants to be a Mole-ionnaire’.

Students of our senior school were equally entertained as the merriment continued with these classes. Year 11 played Molecular Mass Bingo with Year 12 making sherbet. Our sixth form students weren’t to miss an opportunity to heat up the oven and demonstrate their baking skills. Year 13 had a Cake Baking Contest with Year 14 making ‘le-mole-ade’ and honeycomb. The distribution of prizes provided an opportunity for the department to further student interest in this subject as gifts ranged from a mole of glucose, to fashionable safety specs and Chemistry mugs.

Rachel chambers, an AS student commented “Cake tasting has to be the most important day in the chemistry calendar!” A fun day was had by all!