Wallace High School Upper Sixth pupils commenced their study leave in style this week . Their final day of school was certainly memorable as the Upper Sixth Committee along with their Form teachers had organised a series of events to mark the end of an era. Following distribution of examination cards, speeches were made by the school’s Principal Mrs Anne McBride and by Form teachers.

Upper Sixth pupils then showed an entertaining video which captured humorous aspects of daily life in the school. The 18 year olds then enjoyed performances by musicians from their year. Clips from their Charity fundraising show, ” Christmas Pie” were also shown. 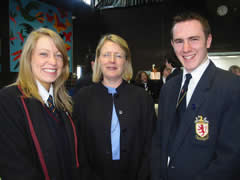 The generous teenagers then took the opportunity to present gifts to their Form Staff, Mr Howard Thompson, Mrs Margaret Mitchell and Mrs Julie Dumigan, as well as Mrs Irene McKeown who has looked after them so well in the Sixth Form Centre.

The Sixth From Committee also presented cheques to Mrs McBride to be passed on to a range of charities.

Following coffee with with subject teachers and an opportunity to reminisce, the Upper Sixths then moved outside to enjoy a BBQ in the school grounds. The relaxing day continued in a fun-filled way with organised games and activities including a bouncy castle and an inflatable assault course.

Chairperson of the Committe, Andrew Watson, commented, ” Our final day proved a fitting end to our time in Wallace. We’ve all been working very hard in preparation for our A Levels and it was great to relax together before we start our study leave. We’d like to thank all the staff of Wallace for making our time here so enjoyable. Thanks also go to the Parent Teacher Association for giving their support to our Leaving Day events.”

For some pupils the final day was especially poignant, as they had spent fourteen years at the Clonevin Park School. Sophie Preston was one pupil who took the opportunity to revisit the Prep Department this week, taking a trip down memory lane to September 1990 when she first joined Wallace.

Sophie concluded, ” I’ve so many happy memories – it’s a big wrench leaving somewhere so familiar but we’re all determined to stay in touch and we’re ready for the new challenges which lie in store.”

All at the school wish them well in their forthcoming examinations.