Comic Relief : Principal for the Day 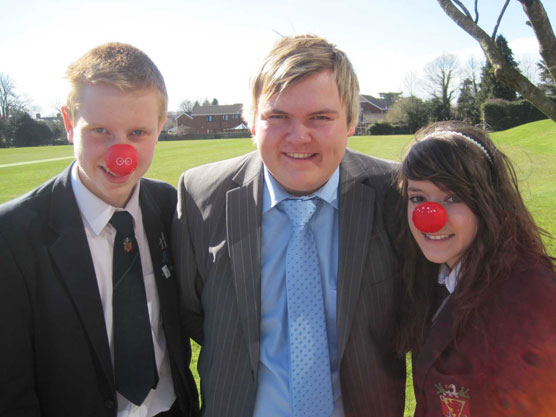 House Captain Aaron had been voted “Principal for the Day” by the school community to raise funds for Comic Relief. Pupils at the Clonevin Park School were delighted when their Principal, Mrs Deborah O’Hare, agreed to relinquish control for the day.

Aaron’s day began in style as he parked his Ford Fiesta, complete with R plates, in the Principal’s parking spot before taking up position at her desk and enjoying a morning coffee made by Mrs O’Hare.

He then took to the stage for morning assembly, outlining his rules for the day which included allowing junior pupils access to Sixth Form corridors, relaxing the uniform regulations and extending break time.

He showed he meant business by calling all teachers to a break time briefing and carrying out an inspection of the English Department.

High points of the day included playing dance music over the school’s Public Address system and leading a conga line of students around the cricket pitch. Between Principal’s duties he still managed to attend A Level classes, even completing a Mock examination for English Literature.

Aaron was certainly a popular choice amongst pupils and staff, with Sixth Former Colin Matthews joking, “He’s the people’s choice – I reckon Aaron should reconsider his hopes of becoming a Sports Journalist and opt for teaching instead.”

Aaron added, “It was a great day and I’m delighted that so many people voted for me. It was an honour to lead Wallace for the day and it was great to work with Mrs O’Hare. The generosity of our school community is outstanding – I’m proud to say that in this week alone we’ve raised £3000 for charities including Comic Relief, Food for Thought, Diabetes UK and the Japanese Earthquake Relief Fund.”